For Blazing Sails players, this guide will provide some advice for all ye fresh bait new to the sea from a scurvy sea dog! Aarr! Let’s check it out.

Arrr me hearties it be Capn’ Jasta here ready to whip you into shape for a life on the ocean main. I won’t be tellin’ ye the basic controls or any of that stuff, this is more some wise words from an old salt on how to stay above Davy Jones’ Locker and maybe earn yourself a pegleg before you’re strung up from the yardarm.

First thing when you join the lobby is you’ll need to join a ship. Try to avoid being aboard a ship with only two or three crew – you’ll just be fresh meat for the sharks! If you’re a solo or duo, find a flag of another ship looking for some more mates or drop your own and recruit some jack tars of your own! 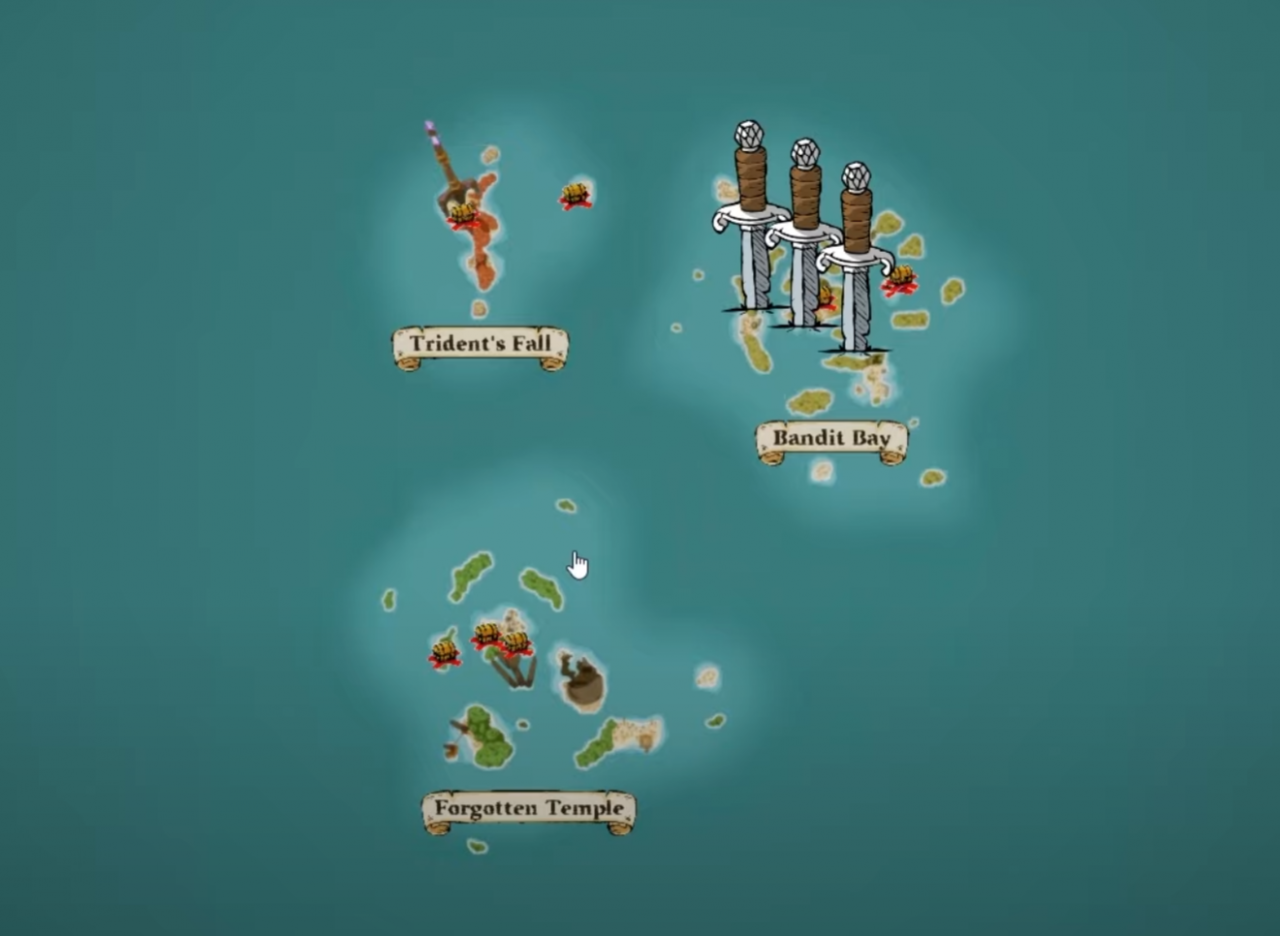 Your first task when the match starts for real is to choose a starting island. Try to pick a spot that has at least one treasure chest, but be warned the islands with the most booty also have the most competition! 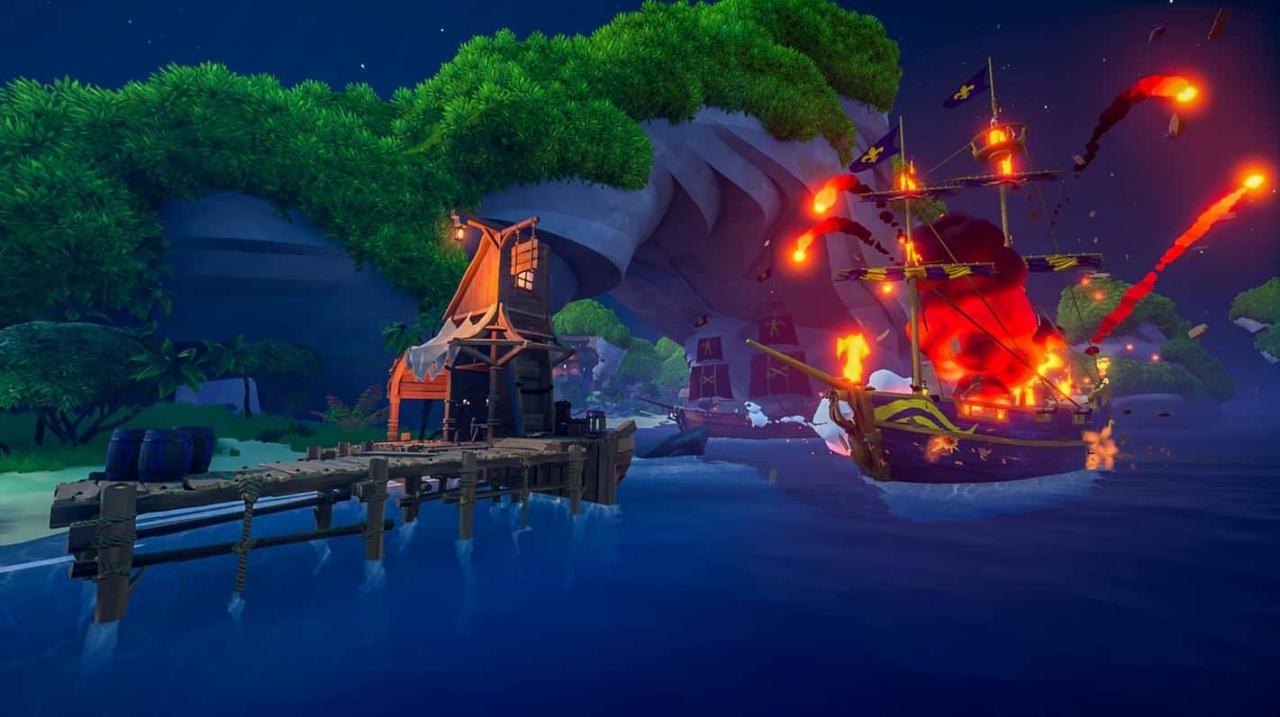 When you do spawn, immediately look and see if you have any enemy ships nearby, as they will be an immediate threat. Be especially careful of any ships hidden just around a bay or headland. Don’t expect an immediate volley of cannon fire but it really doesn’t take long for the lead to start flying!

If in doubt, have one person get your ship moving BEFORE they go scavenge the island.

There will be other chances to get loot and if you just leave your ship sitting there it’s likely to be halfway to the ocean floor by the time you can teleport back if your enemy has a weather eye out. If you’re feeling aggressive have someone return as fast as possible with some wood and cannonballs and stand by to repel boarders! 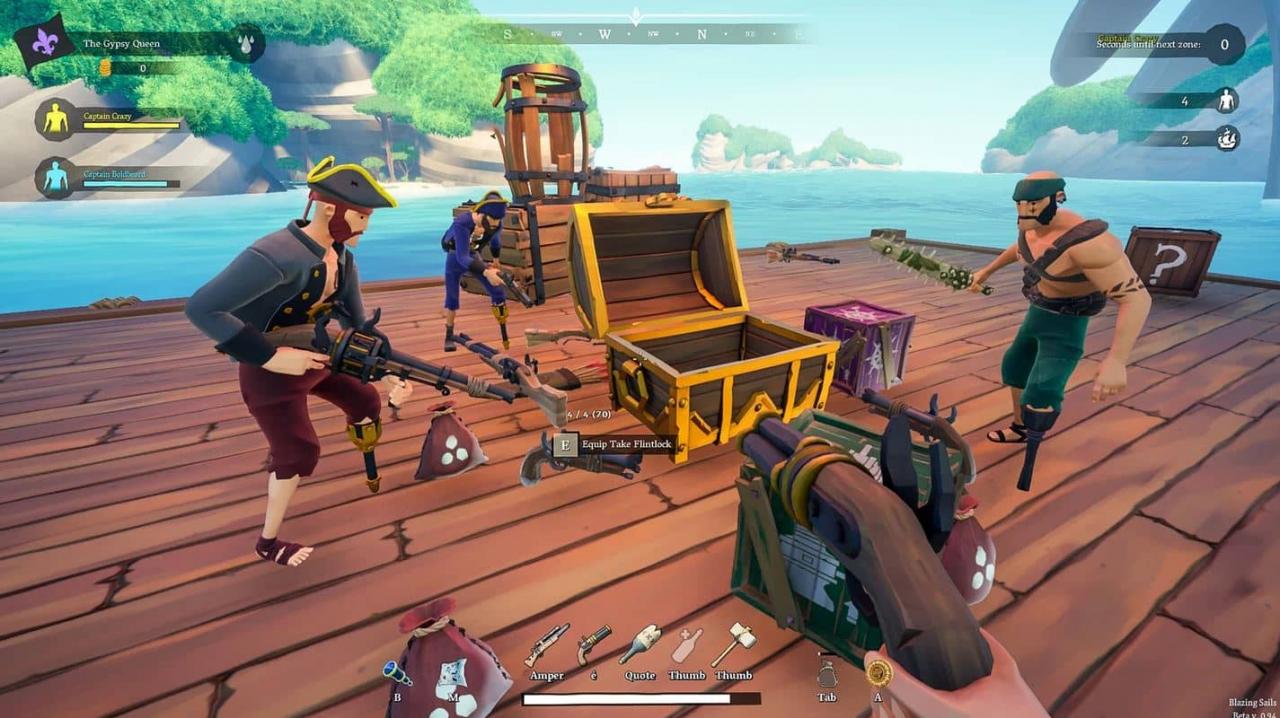 When you are looting, your primary objective is to get to any chests as fast as possible for ship upgrades and weapons, but don’t forget the basics. Wood is the most important resource – as long as you have wood you always have a chance to win. Drop crossbow bolts and fish ammo if you’re low on space, they’re not often needed.

A Life on the Ocean Main

Once you’ve looted your first few islands and started to sail the wider seas, make sure your crew is in order. There are many ways to crew a ship but here’s a few important roles to keep in mind: 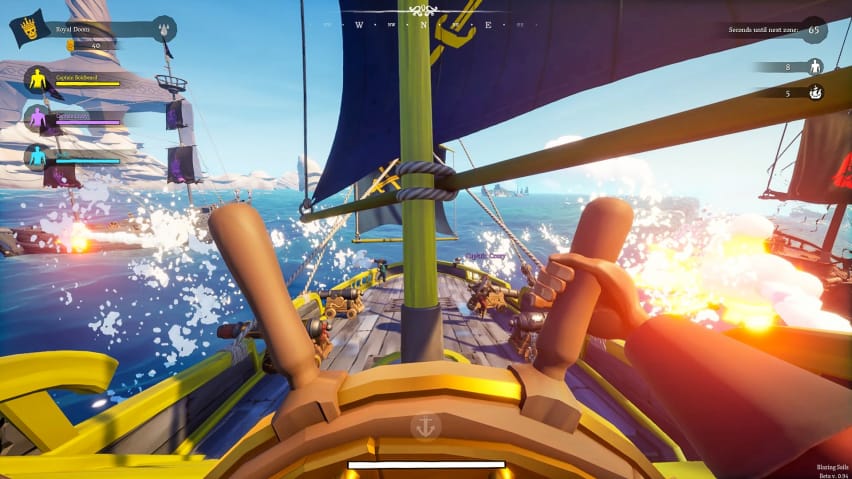 Captain/Helmsman
It’s not the most swashbuckling role but it’s incredibly important and possibly the most difficult. The ship that can keep its cannon pointed at the enemy and in fair winds and following seas will win the game. If you’re new to the game or with an unfamiliar crew, probably best not to take this role unless nobody else is.

The Captain is required to: 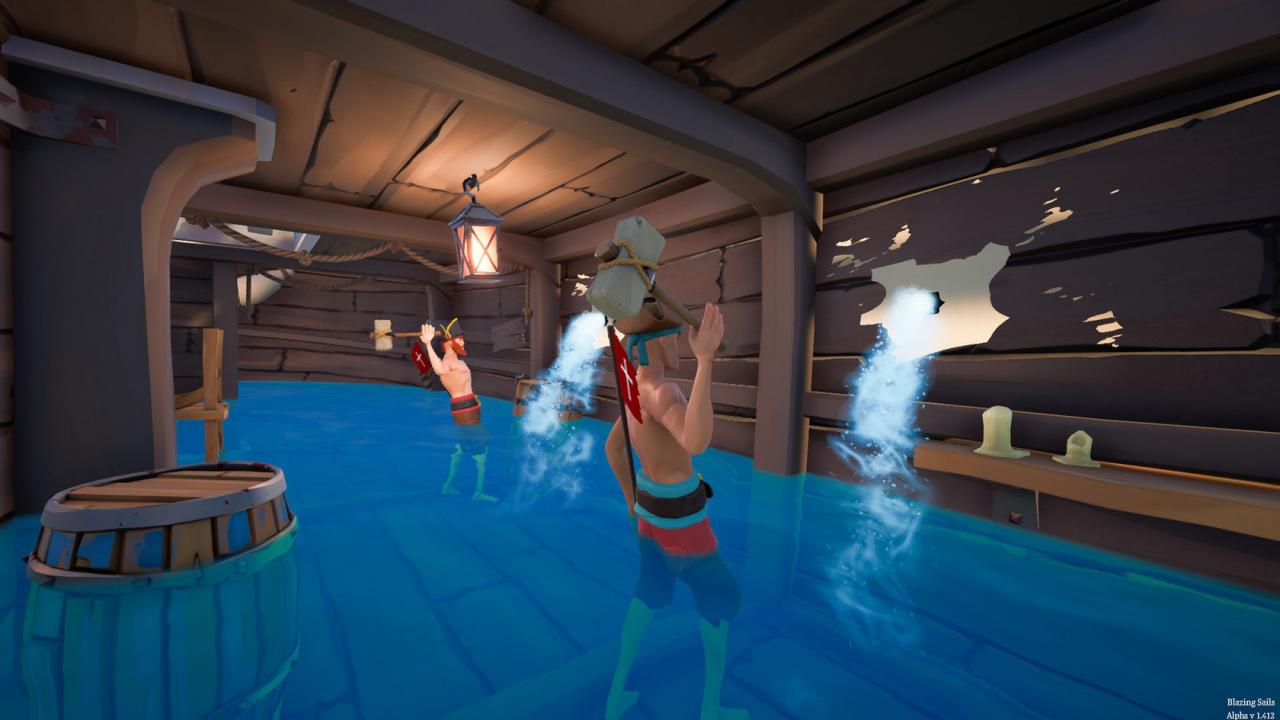 Carpenter/Cabin Boy
Not the most glamorous but maybe the most important. Without a dedicated repairer you’ll be swimming for Tortuga in minutes. You don’t need to be below decks with a hammer the entire time but you MUST at least nominate someone to be the first person below when the timbers start popping loose or your crew will just assume somebody else is doing it.

This is a good role for whoever didn’t get the best weapons – but you’ll see your fair share of action!

The Carpenter is required to: 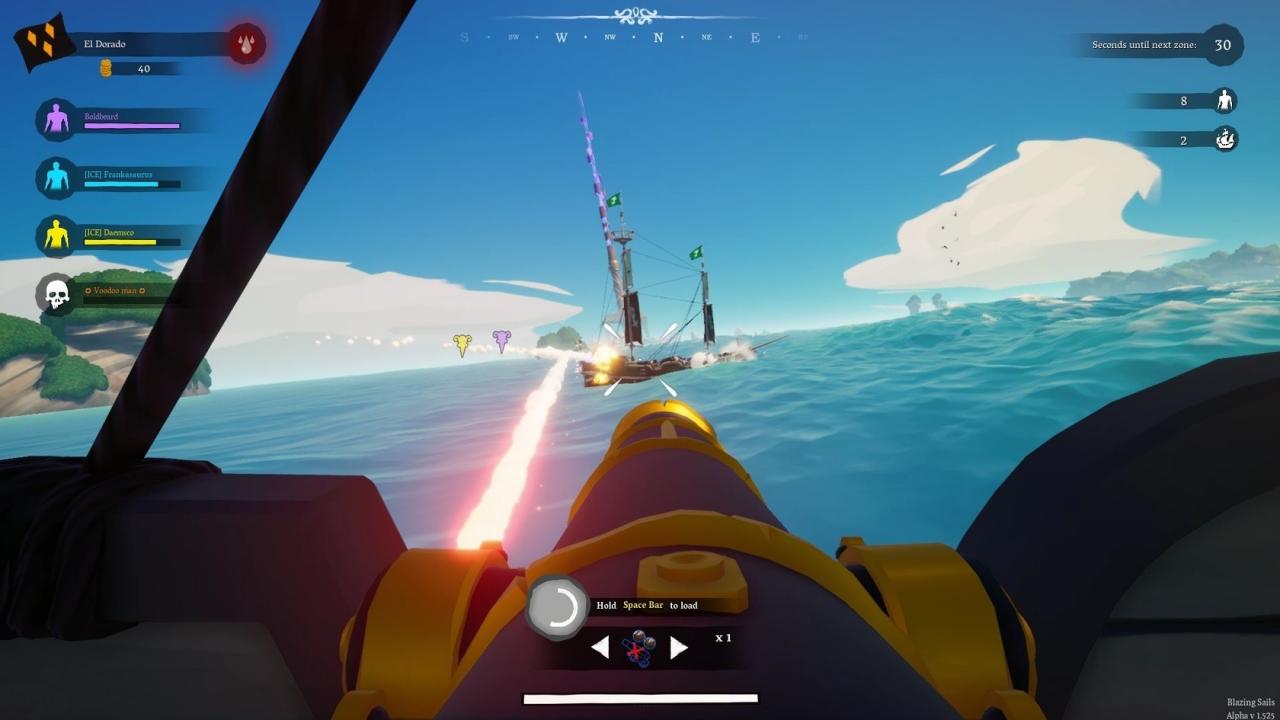 Remember that if you both board an enemy ship, your own cannons will probably fall silent – for quite a while too if you both die. The Captain and the Cabin Boy really can’t afford to cover your guns.

The Gunner/Boarder is required to:

Boarding is its own special skill in Blazing Sails and a lot of players new to the Pirate life make some elementary mistakes. Capn’ Jasta is here to give you some advice. 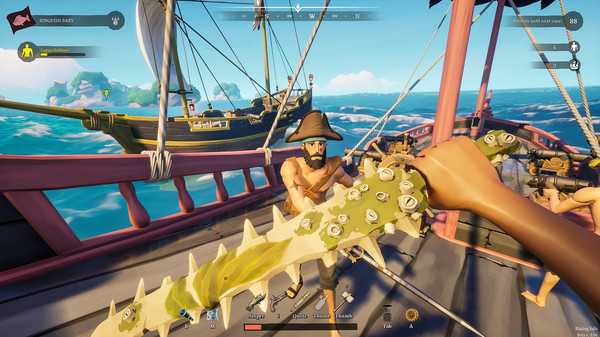 Don’t try to sink the ship on your own!
Even with the best weapons a pirate can find, you won’t have a lot of luck taking on four alert crew just by yourself. The longer you can stay alive on the enemy ship the longer they’re running around trying to kill you instead of patching holes or firing cannons. Be unpredictable and don’t be afraid to jump overboard to buy some time.

Cut off the head!
A good first target is the Captain at the helm. A ship with no pirate at the helm is a ship out of control. Better yet, when the captain leaves his position you can quickly take the wuheel and slam on the anchor. This can really throw the ship into chaos, ruin their gunners aim and gives you a chance to reboard if you need to take a swim to avoid retaliation.

Don’t Go Off Half Corked!
Charging straight for the cork is unlikely to get great results. Corking a fully manned ship will likely do almost nothing if they’re paying attention and chances are you’ll get a musket ball in the back while you try. The cork can be a good distraction if you’re completely unseen or the final nail in the coffin if they’re already a man or two down but it’s not your primary objective. Better to kill off some crew first or just stay alive!

Don’t Forget to Plunder!
You probably don’t have time to steal while the enemy ship is still afloat but absolutely grab anything that isn’t nailed down if it’s already done for. It’s much slower than grabbing your own stores but extra speciality cannon balls or rum can be a godsend.

Don’t Bring Presents
Take enough small ammunition and a few bottles of rum when you board but definitely try not take wood, cannon balls or ship upgrades! Pirates take, they don’t deliver!

That’s all we are sharing today in Blazing Sails Hints and Tips for Landlubbers, if there are anything you want to add please feel free to leave a comment below.