For those of you taking up the semester at Hearthstone’s Scholomance Academy expansion, you will have more to look forward to later this month. September will bring three weeks of free content for the expansion, starting with the Hearthstone Forbidden Libraryevent. Beginning on September 8, players will be able to enjoy the ever-popular Battlegrounds mode with parties of up to eight players.Those looking to play a private game just need a party of five or more to jump in. Ranked play will require a party of four or fewer though.

Lord Barov’s friendly wager ability at 1 cost rewards players for guessing which side will win the next combat. You will receive three coins if you are correct. Jandice Barov’s Swap, Lock, & Shop It 0 cost ability lets you swap a friendly non-golden minion with a random one found in Bob’s Tavern. Players can get two gold after Bob’s Tavern is upgraded, but only for that turn, using Forest Warden Omu’s passive.

The Hearthstone Forbidden Library event will see a new solo adventure on September 15. Chronicling the origin story of Jaina Proudmoore, this free addition will also pack a reward. Players will receive a Mage Pack for completing the adventure. This Book of Heroes content will carry on for the next year, giving players more understanding and story about Hearthstone‘s 10 core heroes. 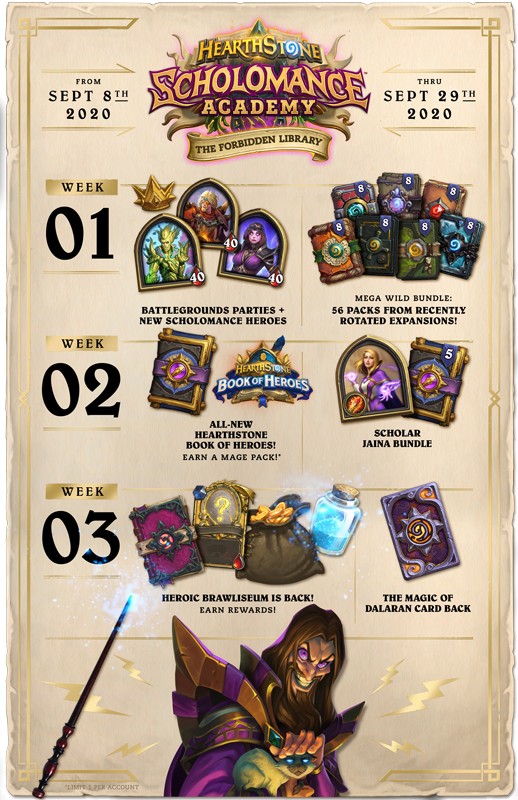 Putting it on the line

September 23 will welcome the addition of the Heroic Brawliseum as part of the Hearthstone Forbidden Library event. This special tavern brawl will task players to construct a deck and compete against others. You will either have to lose three matches or win 12. The more games you win, the better your rewards. The entry fee for the Heroic Brawliseum will be $9.99 USD, or 1000 gold.

Hearthstone – How to Unlock the Golden Transfer Students
18.10.2020

What Changed in Diablo II: Resurrected, and What Remained the Same
21.02.2021

Streamer Was the First to Reach the Maximum Level in WoW Classic
30.08.2019