I Am Dead – Collectibles & Riddles Guide

For players of I Am Dead, this guide lists the solutions to all 30 riddles and the placement of each level’s unique collectibles. Let’s check it out.

This guide spells out the answers for this game’s more tricky achievements. The riddle answers, as in what objects need to be interacted with to solve the riddle, are listed in the second section. I would recommend doing as many as you can before turning to this guide, but there’s no shame in getting stuck.
Collectibles are sorted into their own individual sections for each achievements.
Note that all collectibles must be found in one load of a level; e.g. if you find seven out of the nine cats in one load and return later to find the last one, you will need to check all nine to trigger the achievement.
Also, my apologies, but I was not planning on making a guide when I played the Lighthouse and the Sculpture Garden, so I do not have a good grasp on those collectibles. I will give as much information as I can, and invite you to point out what I’m missing. Sorry for any inconvenience this causes.

Below, the solution to each area’s five riddles are given.

Yapp’s Head Lighthouse
Riddle list is in the yoga room position poster
Unexpected Spider – In the first floor foyer. Check the Shoe and Coat Rack, and open the Oar in a Boot. Zoom all the way in, and you’ll find a spider.
Upward Dog – In EM’s Room, second to roof floor. On the board game shelf, open the middle box, called Downward Dog. The Yellow Dog playing piece standing upright is the solution
Resting Robin – In the basement. In the diving helmet on one of the shelves, zoom in. The skull of Robin Firth inside is the solution.
Hungry Caterpillar – In the second floor Kitchen. Open the fridge, and then open the lettuce on the lowest shelf. Zoom all the way in to see a caterpillar munching down.
Misplaced Control – In the lounge, on the second floor. Open the Comfy Armchair, and zoom all the way in. A Lost Remote Control is trapped to the side.

Sculpture Park Riddles
The riddle list is at the Valerie Outram’s Commemorative Bench, in the hiking trail map.
Lucky Rabbit’s Run – Also at the Commemorative Bench. Behind the bench is a dirt mound, which is actually a rabbit’s den. To the side is a pair of Fisherman’s boots, which is the solution.
Long Yolk Stretch – Head to the Picnic ( a separate scene between the Top and the Birdhouses). Within the Picnic Basket is a Gala Pie (with a long boiled egg running through it), which is the answer.
The Truncated Route -. At the Pilgrimage Statue, head to the Treehouse. A Tree Stump ( a truncated root) is the answer
Arrow Flint Down – Right next to the above, by the Treehouse. Zoom in to the actual treehouse and, between the siblings, is Katie & Arthur’s Secret Treasure Box. An arrowhead is inside and is the solution.
Auld Lairdslumbering – At The Laird As A Camel. Enter the statue and select the Laird’s Coffin

Old Town Riddles
At the Signpost, the bands on the Event Board are the riddle names
Hard Cell – At the Harbour Arm. The big concrete structure to the right, the Shelmerston Compter (a concrete cell), is the answer
Houdini Cephalopod – Go to the Fish Market. At the upper stall, Gaston Parry’s, enter the Water Tower. Zoom in to find Slippery Derek, the Houdini octopus.
Royal Tuber – At Laura Baxter’s Allotment. A plant box by the compost bin holds a King Edward Potato, the solution.
The Worms – Also at Laura Baxter’s Allotment, right next to the above. The Compost Bin is full of worms, and is such the solution.
The Wizard Seagull – Behind the leftmost business, The Big Scoop. Behind the parlor is a cardboard Box, where Gerry the seagull wears an ice cream cone like a hat, and is the answer.

Campsite Riddles
Riddle list is found at Race HQ, within the magazine on the bench
Shroomy Turbotank – The Water Butte behind the Campsite Main Office is infested with Persistent Waxcap mushrooms.
Least Season’s Old Banger – They mean banger in the British sense, a sausage. On Pitch 16 & 17, click on the BBQ and zoom in for a Burnt Sausage stuck in the coals.
Bivalve Goldheart – On the Mussel Pole by the Shell race track. Cut in for the golden pearl in the upper mussels.
El Gran Cabellero Jr. – Inside the play area. Within the play tunnel, there are two luchadores and a snake with a luchador-shaped bulge in its belly. Click on the snake and then it’s stomach bulge for this luchador. This also goes for the Suplex Achievement.
The Nippy Sculler 100 – To the left side of the Wash Block building. Zoom in on the log pile, to the brick beneath it. Beneath that brick is several insects. The long centipede, the Common Cryptops, is the riddle solution.

Boats of Shelmerston Riddles
The riddle page is the Know Your Concrete Armour Units! poster inside the SEADEF barge’s office
Hidden Diamond – Also in the Barge office. On the Break Table, check under the hard hat for a hidden diamond playing card
Lonely Mouse Ball – Right next to the poster, in the SEADEF Barge Office. Head to the computer desk, and look beneath it for the Lost Mouse Ball
Stationary Honing Device – Also in the Barge’s office. On the Break Table, zoom into the Foul Mug to find a pencil sharpener hidden at the bottom.
Wee Secret Weapon – On the Maisy-Louise. Enter the Galley, and check the smallest pair of boots by the lockers. In Wee Rab’s boots, you’ll find Wee Rab’s Knife.
Captain’s Sausages – On the Queen of the Isles Ferry. In the captain’s Private Cabin, check the lockers. A tin of sausages is in the upper right one, under the hanging shirt.

Museum Riddles
The list is in the lighthouse case, on the poster of rocks
The Encrusted Crown – In the Festival of the Sea case. The Whelken Crown in the left side of the case is the answer.
The Tiny Lord – Inside the Legend of the Camel case. Inside the Shelmerston Hall Scale Model, there is a tiny little scale model of the Laird.
Paddling Puss – In the Cabinet of Curiosites. Bosphorus the swimming Cat, the blue block in the middle, is the solution.
The Girdled Cushion – In the Gansey Knitting on Shelmerston case. By the belt on the right side is a pin cushion, which is the answer.
The Second Serpent – Inside the Shelmerston Silver band Case. There is a literal serpent inside the curvy instrument called the Serpent.

They Are Actually Very Fashionable (WIP)

This one is a mess. There are at least fifteen Crocs across the lighthouse. I believe this is all of them, but I may be wrong.
1-5 – In foyer, on the shoe shelf. A pair of blue crocs, a pair of green, and a single yellow. (Note: the two pairs are counted as single object. You click on one, you click on both.)
6 – In bath room, by the toilet. Orange croc
7 – On gardening floor. In a chest of drawers, first level of shelves. Purple Croc
8 – In bulb room. In side table, zoom in for a blue croc
9 – In Bedroom. Inside the wardrobe, there is a pink croc on the bottom level.
10 – Also in bedroom. Inside chest of drawers, there is a green croc
11 – In kitchen. Enter the kitchen counter, and angle the camera so you can see the green croc in the pot. This one is pictured below.
12 – In lounge. Purple Clog on the lower level of the table with the Buddha collection.
13 – Also in lounge. Enter the Grandfather Clock, and look to the bottom for a pink Croc.
14 – Lobby, inside the sideboard. Orange croc
15 – Basement. On the shelf with the air tank is a single blue croc. 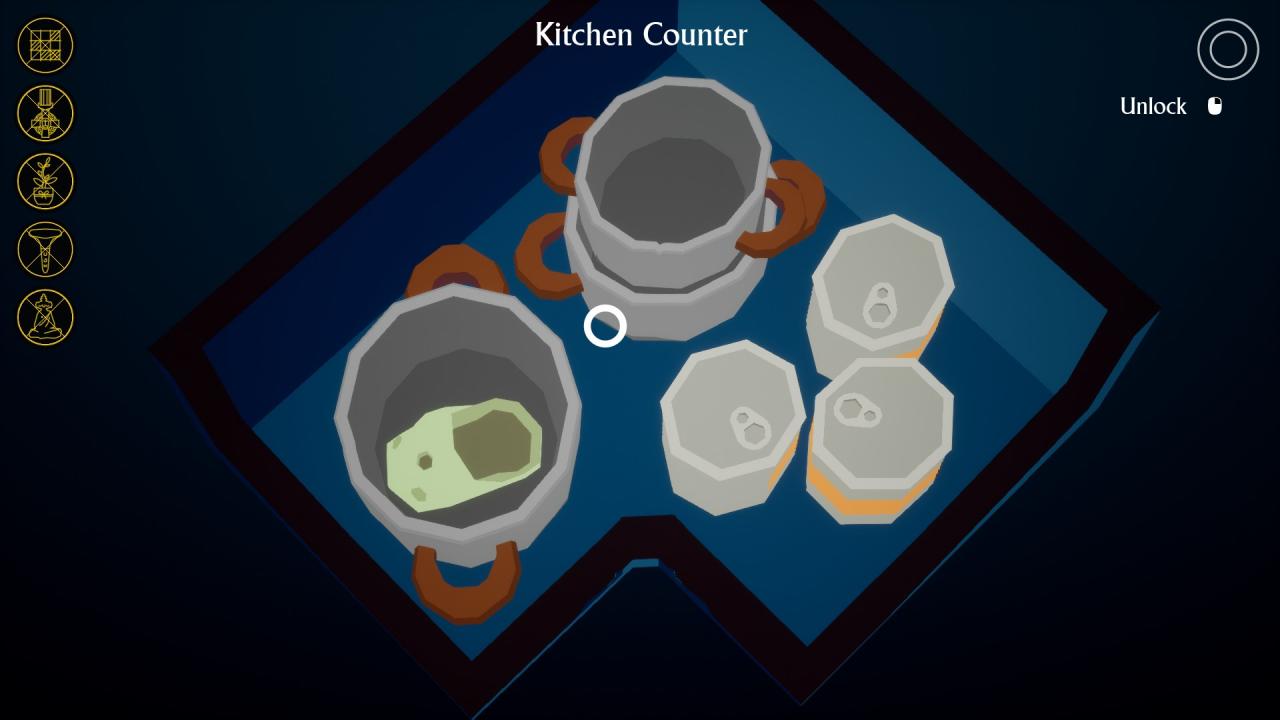 Why Do Birds Suddenly Appear (WIP)

There is one wren on a bench, and several more in the birdhouses. I am not certain of the exact numbers.
1 – By the Sargasso Flow & The Seed GIver. On the bench with the badminton racket is a wren.
2-6(???) – By the Morlo memorial are two different trees covered with bird houses. Thoroughly check the birdhouses and click on each wren you see. By my count there were five other wrens in the bird houses.

Change Is As Good As A Holiday

Change Is As Good As A Holiday
There are nine cats total in Old Town
1 – At Shelmerston Sweets. Open the front counter and turn it around to find Balgit hiding under the counter. Balgit is pictured below, because it took me an hour to find him.
2-8 – At Shelmerston Kipper Company. Five cats are in the Bins ( Polly and Boxer by the fence, Superkit in a box, Fats on a trash can, and Jack behind the cans. On the Back Stairs, Biscotti and Smoky Momo are eating fish heads.
9 – Head to the Bee Field. You’ll likely find this one looking for Grenkins. Inside the beehive behind the beekeeper is Mr. Whiskerable 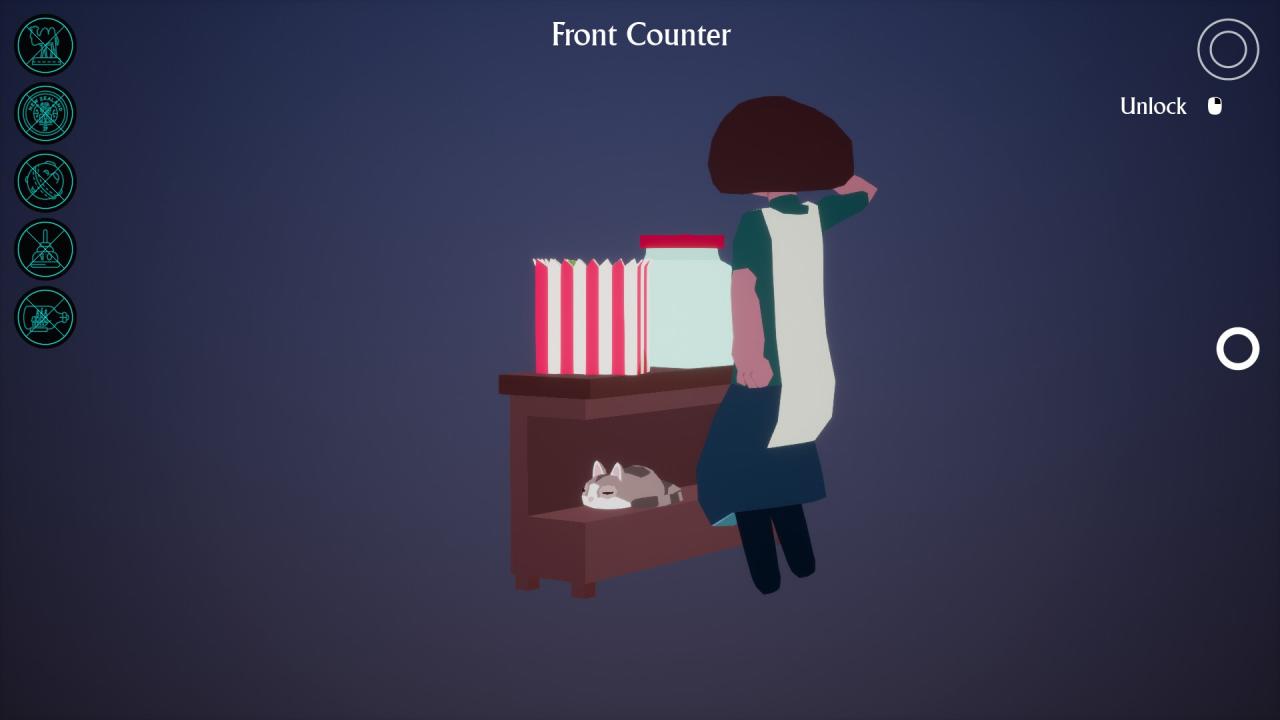 There are six luchadores hidden throughout the camp site. Their bright yellow face masks are a big tell, except for the odd one out.
1 – In the Wash Block building. Lying on its back in the shower room stall.
2 – Inside Greg’s Old Caravan. Enter the Table, and zoom in so you can see the confiscated goods beneath the seat. Right next to the flying disc memento is a wrestler with a few missing limbs.
3 – In the Play Area, sitting on the swings.
4-5 – Also in the Play Area, enter the Play Tunnel and zoom in. Two luchadores are there outside of the snake.
6 – This is the weird one, and also a riddle solution. In the Play Area’s Play tunnel, there is a snake by the other two wrestlers with a weird stomach bulge. Click on the snake and then its bulge for the last luchador, and El Gran Cabellero Jr riddle solution.

This one isn’t hard, but it is counter intuitive. You can interact with the insect cases on the back wall. There are 8 total, in two groups of 4.
1-4. From the right side of the museum, stand between the Morlo and the HMS Mentor exhibits. The first case is in front of you.
5-8. On the left side, stand by the relief map, between the Gansey and the Sheller exhibits. A case of butterflies is between a beetle and a moth case on the far wall.
In the below images, my cursor is on the correct case. Open them and interact with all eight butterflies. 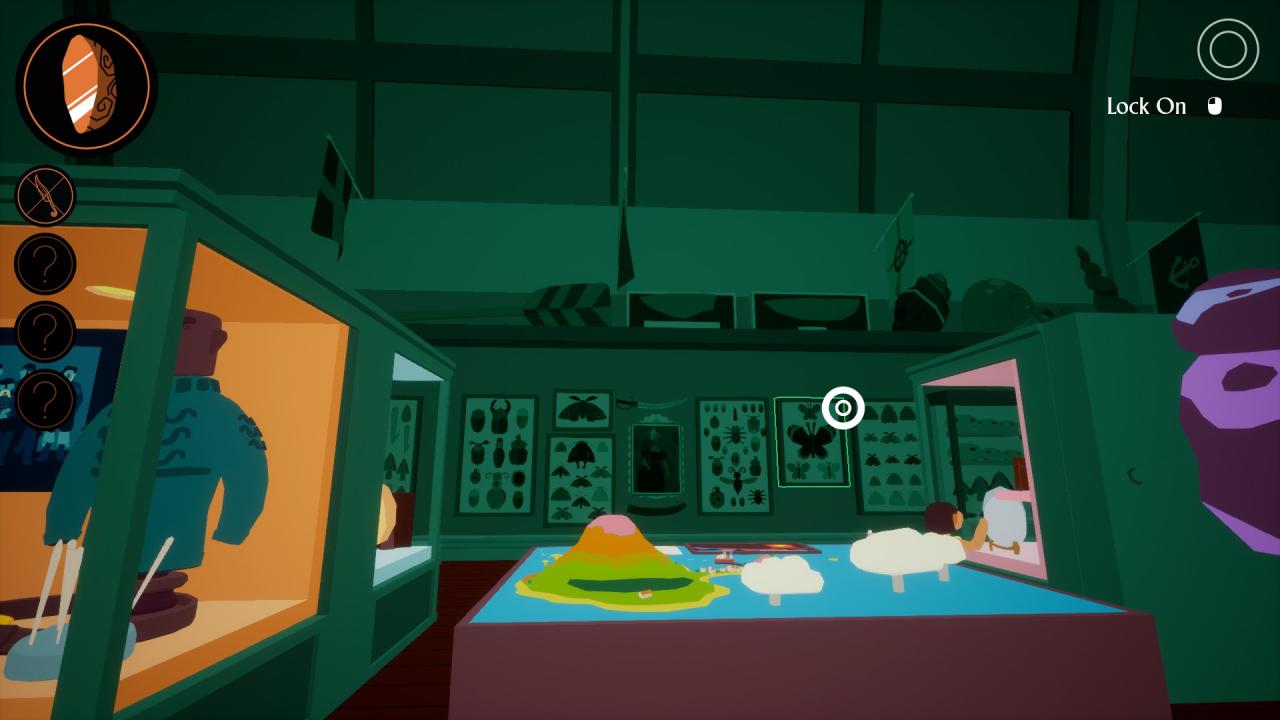 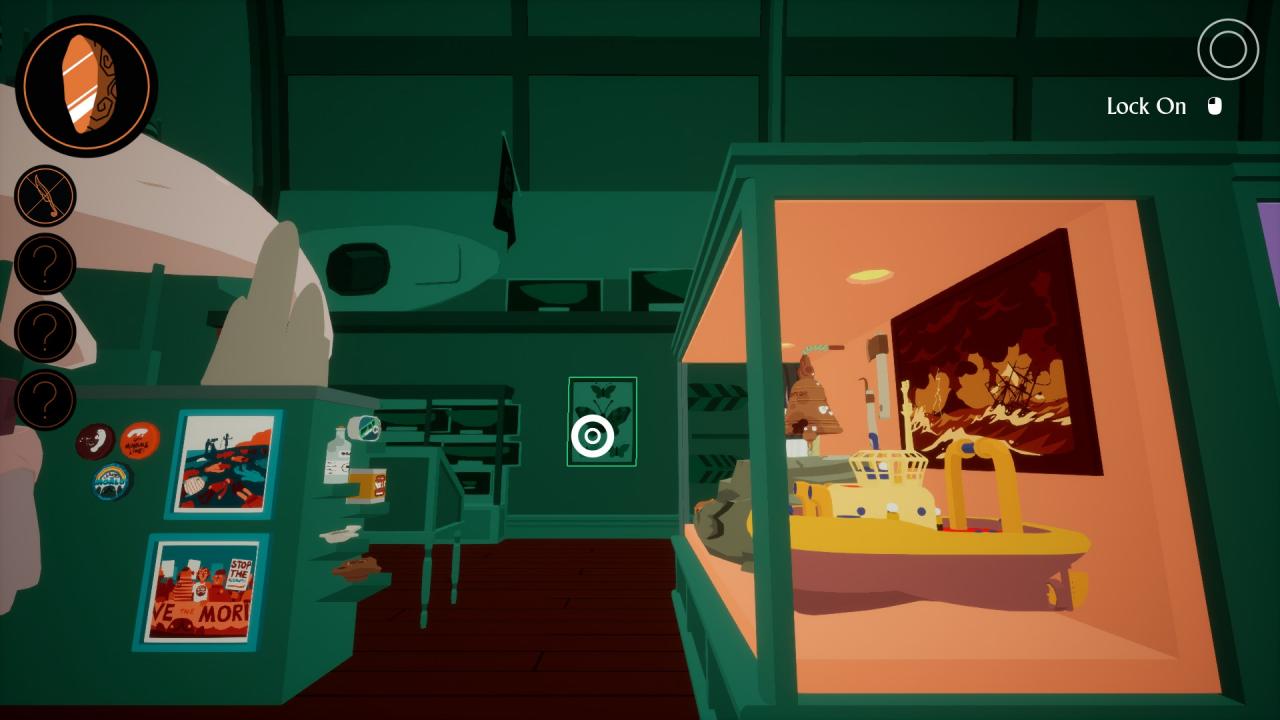 That’s all we are sharing today in I Am Dead Riddles and Collectibles Guide,  if there are anything you want to add please feel free to leave a comment below and we’ll see you soon.