A guide on where to find some secrets in Genshin Impact.

Genshin Impact has exploded in popularity, and it’s only been out just over a week, with over 17 million downloads on mobile devices alone, and that’s’ not even taking into account PC and PlayStation 4 numbers! No one can deny that miHoYo has done a stellar job with Genshin Impact, and without a doubt, the game will keep improving, in size and quality, even more so if the rumors are true about the 1.1 update. As Genshin Impact is an open-world game, exploration is paramount, and you might come across some secrets – like level 4 chests filled with goodies!

The best chests you want to find on your travels are the Lvl 4 Chests, which are named Luxurious Chests. These chests are the ones filled to the brim with the best loot. Inside, you can get – 10 Primogems, 30 Adventure EXP, 4-10 Sigils (dependent on the region you found the chest,) Mora, and a random assortment of Weapons, Artifacts, and Character EXP Material. The first Lvl 4 chest is located between Stormbearer Mountains and Stormbearer Point, the closest waypoint for fast travel is Starfell Valley. If checking on the map, there is a body of water between the two areas, but you want to be on the side of Stormbearer Point, so to the right of this water. Head up to the northernmost point, so there is water in front of you, and if you look to your left, there should be a rushing waterfall. The Lvl 4 chest is on a tiny platform on top of a pillar down below on this body of water, so glide off the mountain and attempt to land on this platform you unlock the chest. However, if you mess up, you’ll find it incredibly hard to manage to climb back up unless you have tons of stamina. 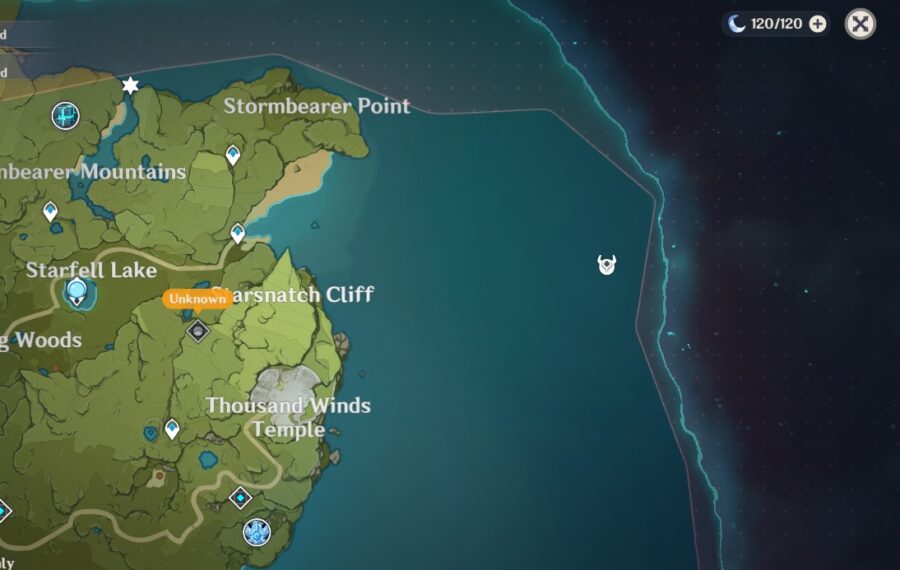 The second Lvl 4 chest is one of the hardest treasures to locate in the game, and you’ll see why. This chest is in the ocean, far to the East of Starfell Lake! To get there it’s best to do this one in coop, as getting it alone you need a lot of Cryo users, and I don’t know if the character cooldown will lead you to your death. Head to the fast travel waypoint at Starfell Valley, the one located on the beach, from here the hidden island is located well to the East, and you need a few things before you manage the journey.

Basically, you need to freeze the water to make a path over to the island. To do this, you need at least 2 Cryo users playing as Kaeya and 1 user playing as the Traveler using the Anemo element. Use the Traveler’s skill ability while one Kaeya player uses there skill ability; using these two skills in conjunction will make the Kaeya’s ability to travel further, meaning more of the water is frozen. Continue doing this until you can see an island, and head towards it.

When on the island you’ll see a circle compass with its arrow facing over the edge of the cliff, this indicates the location of the Lvl 4 chest, so jump off the edge using the glider, and to the right of the platform beneath. 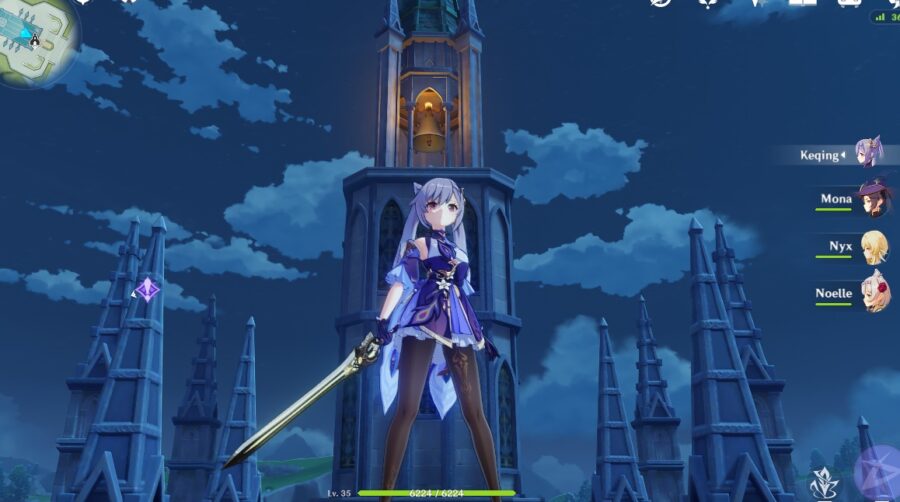 The third Lvl 4 chest is quite easy to get because it’s in the city of Mondstadt. Fast travel to the leftmost waypoint in the city, and head towards the monastery. All you need to do is climb up to the highest point of the monastery where the bell is located, and the chest is yours! 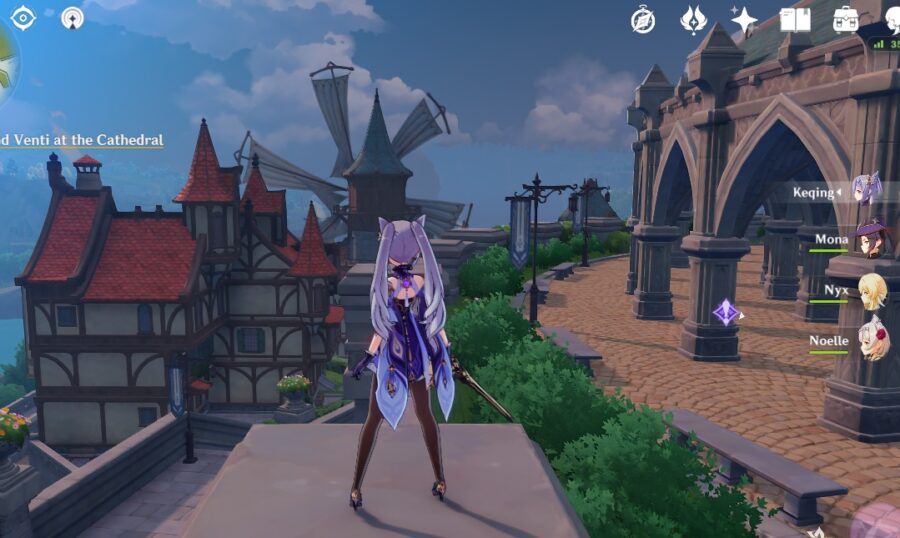 The fourth Lvl 4 chest is different from the others, as something has to be accomplished before it appears. Head to the monastery’s steps and face the fountain statue. On your left will be a set of steps leading down, just before those steps jump on to the square piece of wall to your right, you’ll have a windmill directly in front of you. When on this platform, after a few seconds, a circle appears in front of you. Run through all the circles that appear, and run around the platform until you reach the other side. Upon completion, a Luxurious chest will appear! 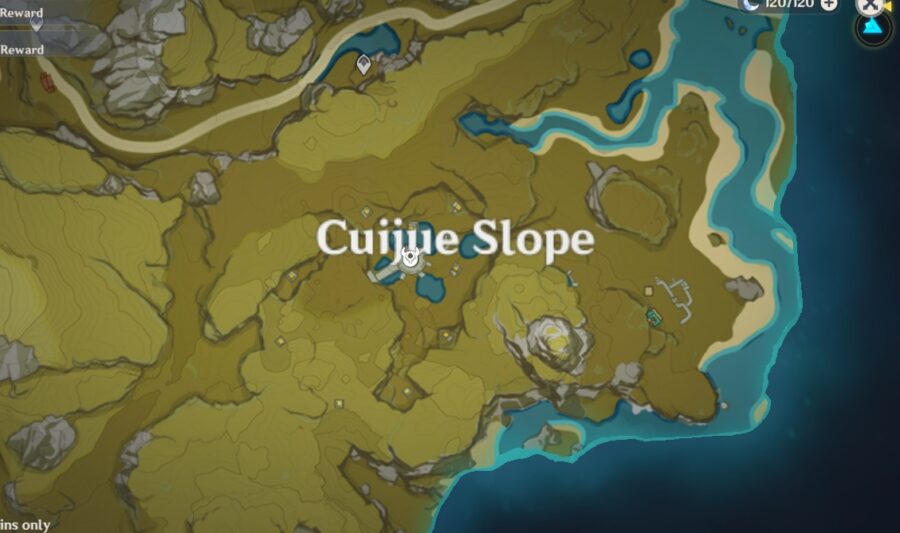 This artifact requires 9 Stone of Remembrance before you can locate it. Stone of Remembrance can be acquired by leveling up the Geo Statue of the Seven with Geoculus. You can check how many you have got by going into the inventory and heading to the Quest section; it has a banner’s icon with an exclamation mark.

Once the 9 Stones have been acquired, go to the quest available in Cuijue Slope by talking to a gravestone. The quest is to activate 9 pillars with the Stone of Remembrance. Around the clearing where the gravestone is, you’ll see pillars scattered about the area, and they have certain parts glowing, these are the pillars. Once all stones have been inserted, the giant stone doors in the area will open, but you’ll have to fight tons of monsters within, and the final boss is a Lvl 50 Ruin Hunter.

Upon its defeat, head into the treasure room, open up the Luxurious chest and a Precious chest, and then on a platform behind the two chests is the 5 Star artifact, the Royal Flora.