In Spellbreak, the locations you can drop at are determined by where the portals spawn around the map. Along with the portals, Mana Vaults will also appear scattered around the Hollow Lands. Deciding where you want to go first will be influenced by these two things. This Spellbreak guide will point out some of the best locations to drop in-game, as well as take you through the strategy I use to rack up kills right off the drop.

When choosing your drop portal in Spellbreak, you also need to be conscious of your class’s abilities and limitations. Don’t drop in a castle if you’re a Frostborn or Stoneshaper. Likewise, don’t drop in a field if you’re a Toxicologist or Tempest. You’re only going to make your life difficult, and probably a whole lot shorter.

My one word of caution about dropping anywhere on the map is to beware of Stoneshapers. They are incredibly powerful when no one has any loot. Do not get sucked into a losing battle. Rather, flee and go loot. You can take down the rock-head later. 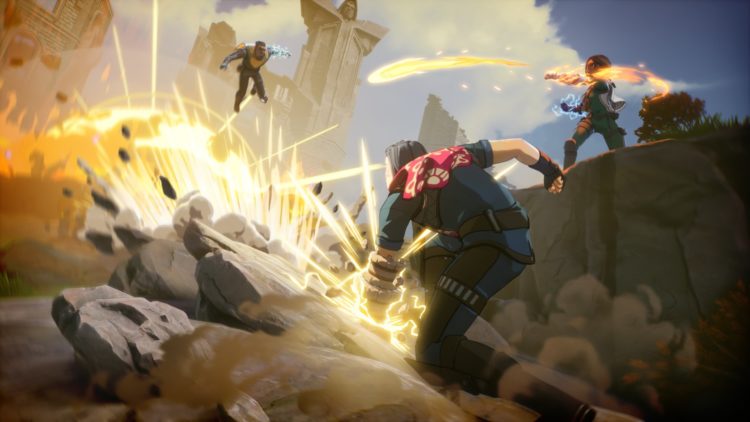 Let’s kick things off with the strategy I use to get kills early on. I like to target areas with a high concentration of Mana Vaults and portals. That way I know there will be good loot, as well as plenty of targets.

Here’s the trick though, don’t go straight for the Mana Vaults, because they take time to open. Mark one while you’re dropping, but land at a location nearby that has a lot of chests. Off the drop, you’re going for quantity over quality. Loot three or four chests before tackling the players at the Mana Vault. Ideally, you’re looking for a belt, secondary Gauntlet, and a Rune. 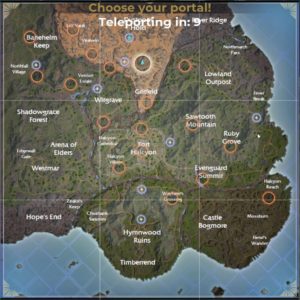 Here I’m targeting Dustpool because of the Mana Vault and two Epic Chests. 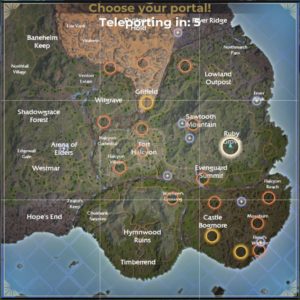 The two Mana Vaults will guarantee players at Sawtooth with this drop.

Players are desperate to get the good loot at the Mana Vaults early, so you can expect unequipped or meagerly-equipped enemies to battle. While you’re fighting, don’t forget to try and quickly snap up any of good loot. Do not try and loot the scroll yet, unless there are enemies already battling off to the side. If that’s the case, then you can quickly try to sneak the scroll.

Once you’ve killed the enemies in the area and looted the Mana Vault, you can move on to the next one. I usually mark the next closest Vault as I’m approaching the first one. You can repeat this strategy throughout the entire match, while both racking up kills and acquiring Epic and Legendary loot.

Thanks to an absolute legend on the Spellbreak discord, choosing the best locations to drop is a lot easier. The battlemage’s name is Shoppi and they created a map with all the locations of the Epic Chests around the Hollow Lands. 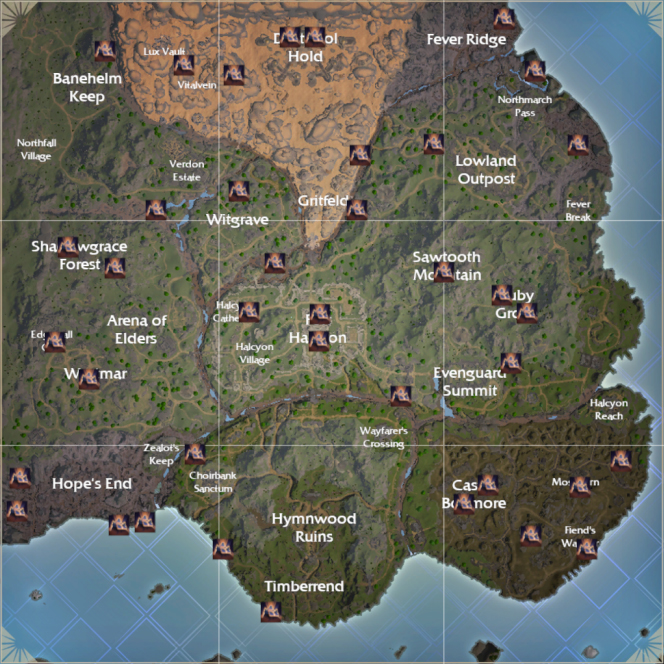 A map of all the locations of Epic Chests.

You can use this map to help choose optimal drop locations. I would target Mana Vaults over these locations. However, if you are new and want a slower start, but still want to pick up some solid power-ups, you can drop at these locations. I like to keep in mind where the Epic Chests are highly concentrated, so that I can pick up scrolls as I move from my early Mana Vault fights towards the next circle.

Dustpool Hold is one of my favorite places to drop in Spellbreak. As you can see from the Epic Chest map above, it has two of these loot-filled lockers right next to each other. It’s great for you if no other players go there. However, the reason I love dropping at Dustpool Hold so much, is that there is almost always a player going for the chests.

I never go straight for the epic chests. Rather, drop just to the left or right of the main dome, grab a few bits of loot, then rush the greedy looter. Sometimes there will be multiple players battling for the Epic Chests, which is even better. You can pick them off while they focus on each other. Then you get to reap all of the rewards. 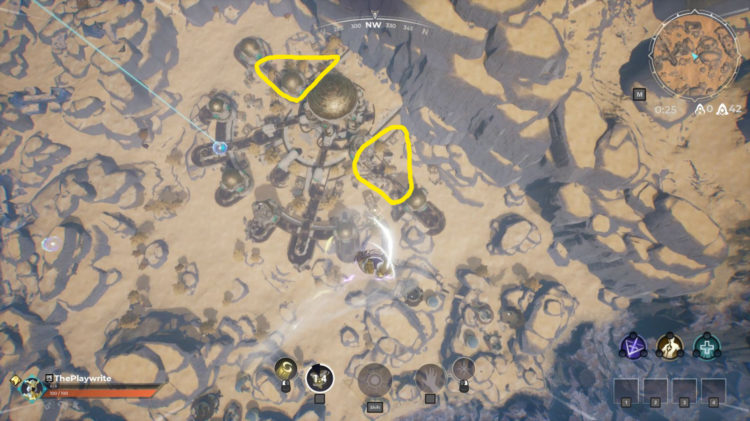 In the image, you can see the two areas you want to loot before heading to the main dome.

If you get off to a good start in Dustpool Hold, you’ll leave the area with all the gear you need to hunt down more players and go for the win.

My other favorite place to drop is the opposite side of the map at Dustpool Hold. In the southernmost part of the Hollow Lands lies Timerrend. This area only has one Epic Chest and is mostly broken-down houses scattered among the hills. It’s one of the most enjoyable terrains to battle in.

If there are a few Mana Vaults in the area, I’ll almost certainly head to Timberrend. You can drop on the Epic Chest, which many people don’t seem to know about, or one of the two houses below. They have three or four chests in or near them for you to get enough loot to start fighting. 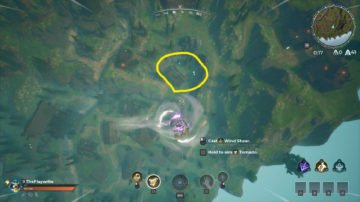 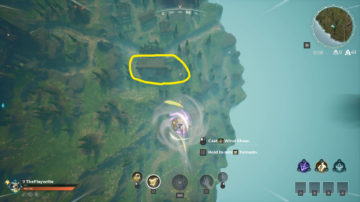 The final place in my list of the best locations to drop in Spellbreak, is the less popular Northmarch Pass. It’s a bit out of the way in the northeast corner of the map. However, it has an Epic Chest adjacent to a house that always has a bunch of loot. If there are a few Mana Vaults nearby, Northmarch can be an excellent place to start racking up your body count. 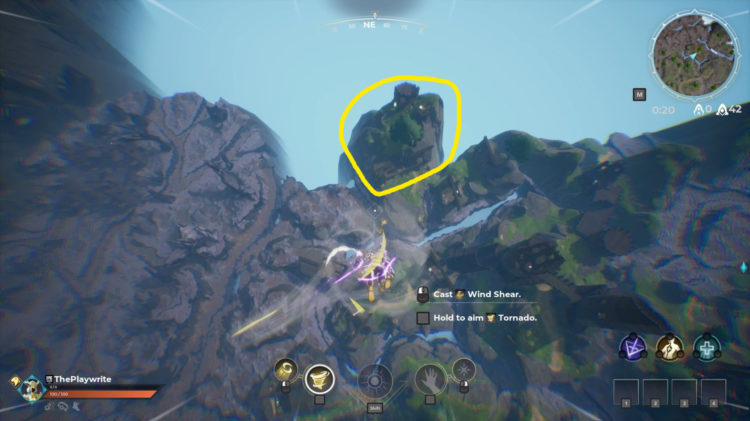 Those are some of Spellbreak’s best locations to drop if you want to gear up fast and rack up kills. There are plenty of other loot-filled areas, like Ruby Grove, Castle Bogmore, and the central For Halcyon. You can implement the high kill drop strategy at these locations too. The ones I’ve mentioned above are simply the locations I’ve had the most success with.

I hope this guide helps you land on your feet in the Hollow Lands.

Genshin Impact Lumine Guide: Know Everything About The Protagonist
16.10.2020