To maximise your chances of a good education it’s important to pick someone suitable for your ward. The following is a quick rundown into the system and how to choose a guardian for your child.

The Education System Explained: How to Choose a Guardian and Maximise The Education Trait for Your Ward / Child

To maximise your chances of a good education it’s important to pick someone suitable for your ward. The following is a quick rundown into the system and how to choose a guardian for your child.

At some point in your childhood you will get a childhood trait. These are randomly assigned to your child and give +1 to two stats. Curious, for example, gives +1 to Diplomacy and +1 Learning. 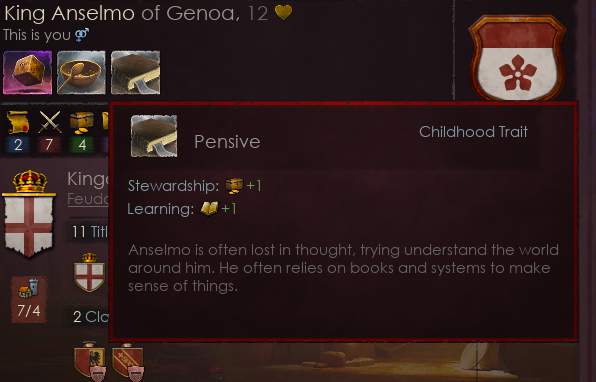 Later on, you will be able to choose an education focus for your child. The game will default to one of the two from your childhood traits, but you can change this to any other one. To maximise your final education trait you should make sure the focus you chooses aligns with the childhood trait you were assigned. For example if the game assigned a Diplomacy focus on a Curious child, we can change it to learning without being penalised.

If you want to change the education focus you should do it as early as possible and find a new guardian. The game tracks your education progress of each focus separately so if you change your mind you won’t be starting from scratch, but you’ll need to find a really good guardian to make up for the time lost. Progress is not carried over when you change (and you can only change it once).

If your focus does not match your childhood trait, you are penalised and there is a much higher chance of getting a lower education trait when you come of age.

How the System Works

Your child has 5 education levels that are tracked internally (one for each education focus).

If we choose diplomacy as our focus, then the game actively tracks education_diplomacy_variable.

When your child comes of age: 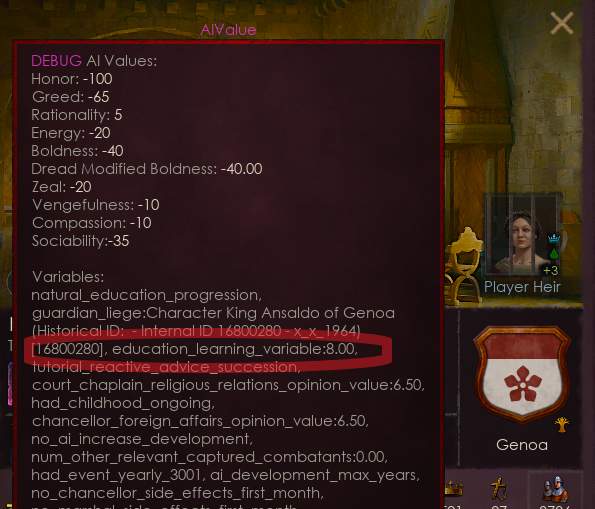 Every year the game rolls a random chance. There are two outcomes: Success or Failure.

Having a focus that does not match your childhood trait adds 20 to the failure modifier.

The game uses modifiers to alter the chances of random events dynamically. Adding a 20 modifier to this failure chance means the percentage of getting a failure each year with a focus that does not match your childhood traits becomes (40 + 20) / (60 + 40 + 20) or 50%.

Not having a guardian at all also adds 20 this modifier.

If your child is a genius this adds 20 to the modifier of success (which is 80/120 or 66%). Having a genius child adds 6% to the base chance each year that they will succeed the check and add 2 points to their education variable. Of course as we add more modifiers to this, it will account for slightly less than 6% (when taking into account everything). Intelligent and quick add 15 and 10 respectively.

If your guardian is a genius this adds 15 to the modifier of success (with intelligent and quick being 10/5 respectively). A guardian with Shrewd also adds 5 to this modifier.

The exact same modifiers are applied to the failure chance if your child/guardian have the negative education traits.

If you build a university and send your child to it, the game adds a flat +12 to the final education_variable. This means to get the best trait you only need to pass 3 of these checks. This all but guarantees the best education trait unless your child is really dumb. (Funnily enough when you come of age, and if you attended university, there is a 2% chance to become a drunkard…)

The guardian’s religion/culture has no effect on the education level at all. This will only affect the conversion chances if you have chosen them when you appointed them as your guardian.

How to Choose a Guardian

There are 3 main things to consider for a guardian:

Because of these weightings, this means a genius guardian is worth 37.5 of the focus skill value or 75 of the learning skill. If you see a genius guardian available it’s nearly almost worth choosing them regardless of their actual skill values. A flat 15 to the modifier is equivalent to a 30 focus skill/15 learning skill character, and since the person with the genius trait is going to have some points anyway you are going to be hard pressed to find another character who can come close.

This also means a genius guardian does not have a big of an effect as you might think. It only adds 5.2% to the base chance of a success tick each year. But a flat +15 to the modifier is much harder to get from raw points alone so you should always prioritise genius guardians first and foremost. 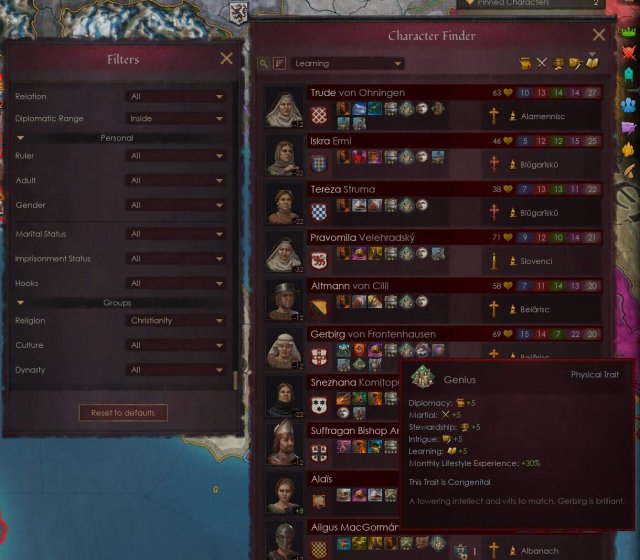 One very important thing to bear in mind: make sure you trust whomever you send your child off to. If you don’t have a genius in your court/realm, you can of course ship them off to be educated in foreign courts. Although shipping your primary heir off probably isn’t the best idea (I personally learned from this hard way when they were assassinated…). It is possible of course that a vassal of your own could kill them, so be careful when sending them away from your own court.

This is best shown with an example (say for a martial focus child):

How to Choose a Guardian Quickly in Game

When we’re playing we don’t really want to be too concerned with these modifiers. To quickly evaluate two characters to decide who is the best one:

The character with the higher combined score is better for your child.

The 22 martial/10 learning is better for your child.

Hopefully this clears up the education system a bit. The education traits are nice, but with the modifiers not having a big of an effect as you might think it’s probably not worth min-maxing any more than quickly doing the above calculation to make a choice.

Interestingly enough, the game says this education check should be done every 6 months. But from my own testing I can only see it happening once a year. It’s possible it’s bugged, or the comments in the game’s files might be out of date.

How to Defeat Bosses in Psycho Krieg and the Fantastic Fustercluck for Borderlands 3 Guide
15.09.2020