Meng Huo is one of the Nanman chieftains you can choose in Total War: Three Kingdoms – The Furious Wild. The would-be king, at this stage of the campaign, is just a minor tribal lord. Later, he could become one of the greatest rulers of the land. Here’s our guide to help you out.

Meng Huo, like the other Nanman faction leaders in Total War: Three Kingdoms – The Furious Wild, starts out in southwestern China. He also has increased diplomatic relations with the other Nanman tribes. However, by default, he has relations penalties with the Han factions (maybe kiddie Zhuge Liang was already ruining his reputation around this time).

Anyway, Meng Huo does start out with Nanzhong Elephants, Nanzhong Spearmen, and Nanzhong Champions. You have two armies — one led by Meng Huo which has another general’s retinue, and another that’s led by your brother and heir Meng Jie.

Take out the initial Jianning Tribes’ army. Have Meng Jie’s army march and provide support too.

Court: You don’t need to recruit anyone who isn’t a unique character (or someone you remember from Luo Guangzhong’s San Guo Yan Yi novel). You’ll have lots of officers via confederation anyway. Just remember that there might be a visual bug when selecting characters who will be assigned to Cave Lord (administrator) positions. The bonuses (or penalties) won’t be visible until they’re assigned, so you should check out their traits and ancillaries first.

Buildings: Places of Festivity (blue) -> Main settlement building -> Sites of Worship. Alternatively, save a bit of gold for any special building that might be required by one of the “unknown missions” for an Economic tech. 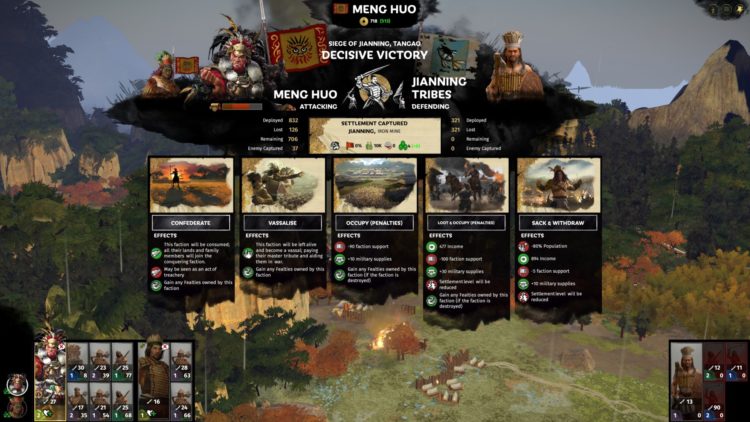 On turn 2, you should be able to capture Jianning – Tangao. This will lead to a dilemma where you can declare war on Ahuinan. Do just that.

The question is: Who should we attack next? 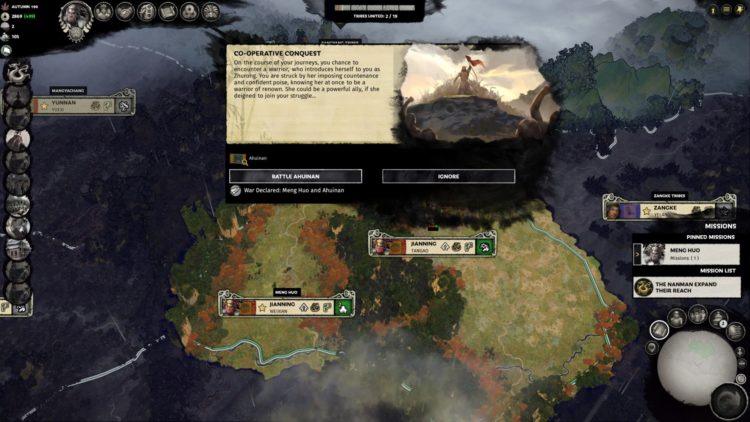 I started out my Total War: Three Kingdoms – The Furious Wild campaign as Meng Huo by buddying up with the Jiangyang Tribes. This means a trade agreement and a non-aggression pact.

Among your neighbors, though, everyone is ripe for the taking. I would advise against befriending Zangke Tribes and Mangyachang since you can quickly expand to their domains soon enough. You can buddy up with Mulu for a while (you need him to act as a buffer against Shi Xie), but you’ll eventually eliminate and confederate with him later too.

At best, just consider the options: 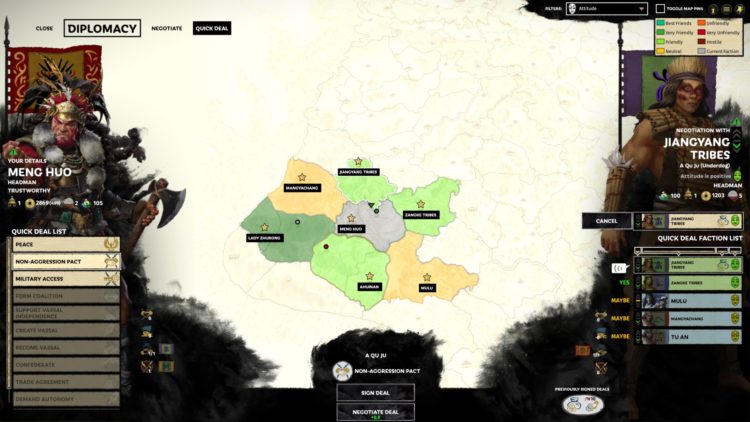 Courtship and marriage with Lady Zhurong

Total War: Three Kingdoms – The Furious Wild lets you experience what might’ve happened between Meng Huo and Lady Zhurong when the two were just young lovebirds. One need only remember Koei Tecmo’s Dynasty Warriors franchise (and how Zhurong always had Meng Huo under her thumb), and that might be evident here given the choices. Anyway, you’ll get several dilemmas involving Zhurong and these will result in either marriage and confederation, or all-out war.

The first one happens after you’ve captured Jianning – Dianchi from Ahuinan. Zhurong will ask for it and you should give it to her. This also boosts diplomatic relations.

As far as I know, these are not dilemmas, just regular trade requests. However, I’ve decided to accept at least one of these just to be safe. 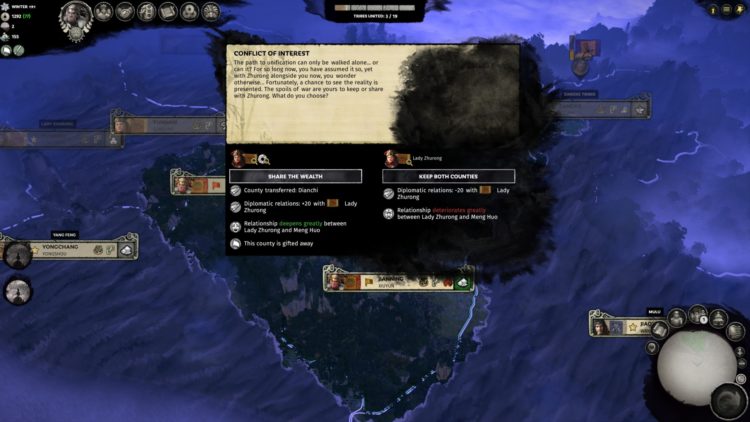 Going on a hunt boosts relations; declining leads to a drop in relations. As of the time of this writing, and even after a couple of replays, I’m still unsure whether these dilemmas or outcomes are triggered by Meng Huo’s prestige rank or other campaign developments. But, eventually, one of two things will happen. 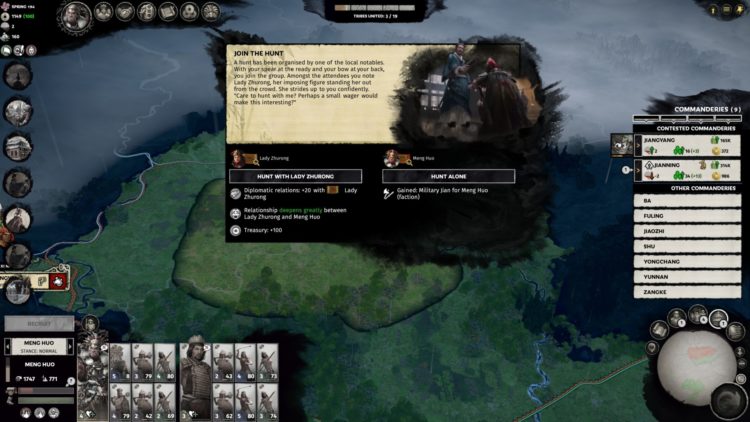 Meng Huo and Zhurong are married. 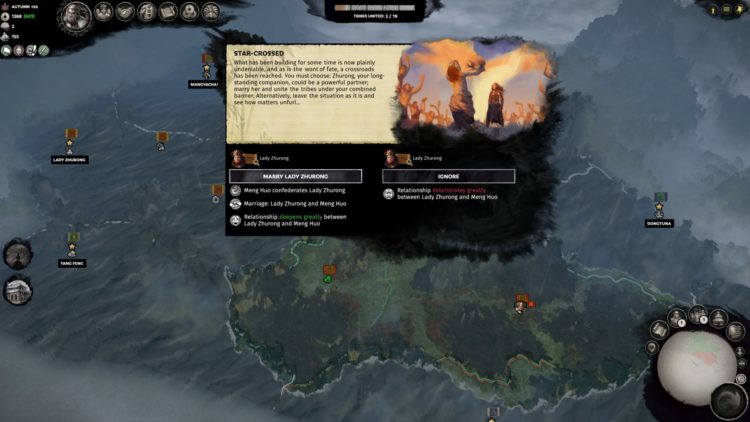 You’ll confederate her faction and gain the fealty of her tribe as well as others that she’s already conquered beforehand. 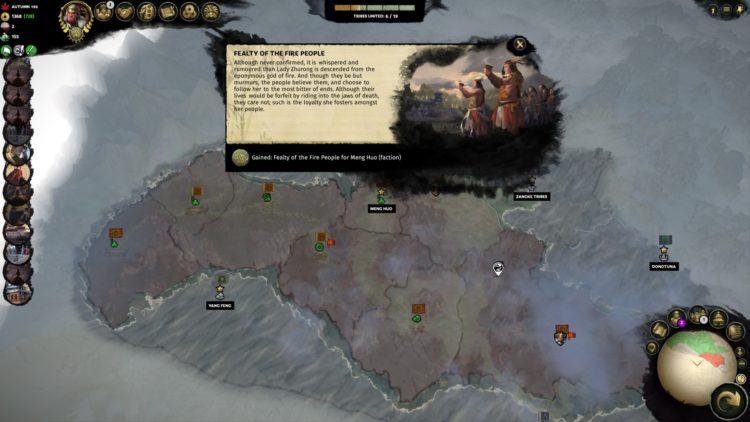 Zhurong will simply declare war on you and march with a full stack straight for your territories. There’s a hint that “there might be something more” — if you defeat five or her armies or garrisons, the decision to marry her would pop up.

If you pick all the positive choices and eventually get married to her, then that’s great. If not, then just pray that you’ve got nearby armies to push her back once she becomes hostile. When you consider the fact that you need to travel further southwest — combined with supply and movement range penalties — it’s an unnecessary distraction from your Total War: Three Kingdoms – The Furious Wild campaign as Meng Huo. 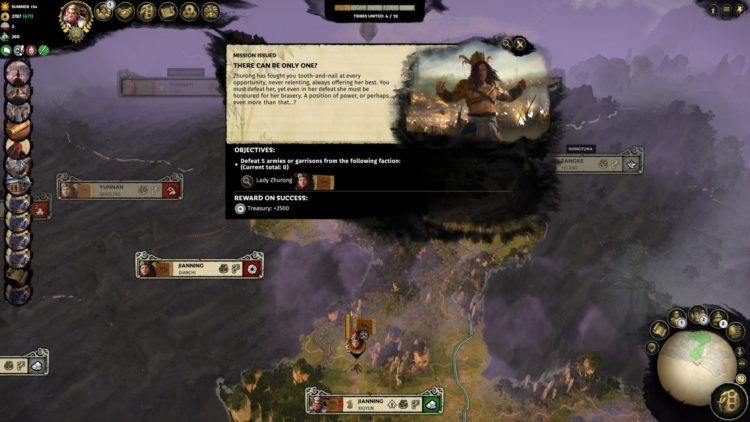 There seems to be a hidden trigger for this — whether Meng Huo gets married to Zhurong or the two end up at war — the nearby Nanman leaders will end up declaring war on you on your next turn. This might be due to a sudden increase in rank (leading to your neighbors perceiving you as a strategic threat).

Anyway, let’s say you get the “Marry Zhurong” dilemma on turn 15. Save your game and make sure you’ve got diplomatic deals (i.e., give 20 gold or 1 food for 10 turns) with other Nanman tribes. This should get them off your back.

Ideally, you should only have those deals with the tribes you don’t want to be at war with. If you want to fight Mangyachang, then just ignore him and let him DOW you before you march towards his domains. 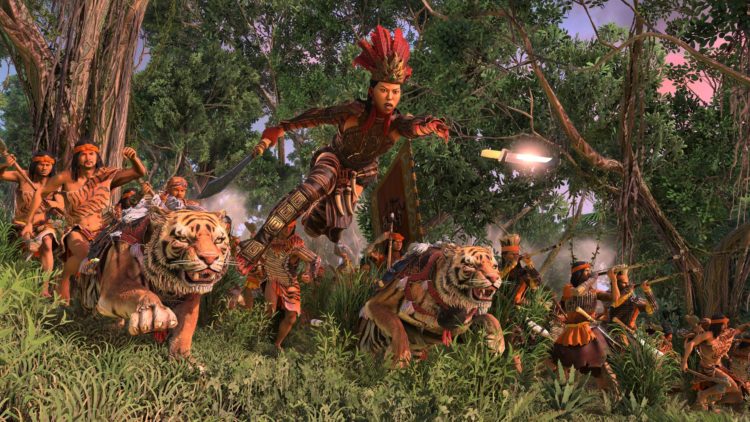 Moving forward: Taking on the other tribes and the Han lords

From here, you’ve got several options. You could still eliminate the remaining Nanman tribes. Keep in mind that Yang Feng all the way to the southwest can be a pain to defeat due to the terrain. Mulu and Shamoke, meanwhile, are probably embroiled in their own conflicts against Shi Xie and Sun Ce respectively.

Go ahead and clobber other factions like Tu An, Xi Ni, Duosi, Dongtuna, or Wutugu. Just be careful of over-extension since you could find yourself at odds with Liu Zhang, Liu Biao, or Ma Teng (who are probably expanding southwards). 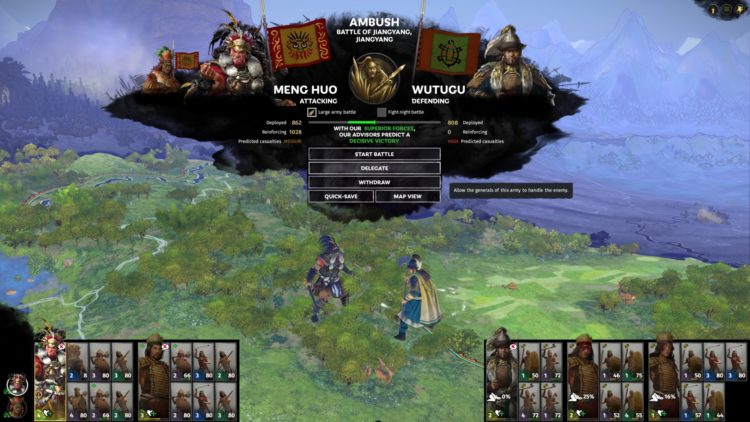 If you want, you could take out Mulu now. He’s a unique character, plus, he’s got a lot of Cunning to help with supplies. If Shi Xie dislikes that, you could defeat him. Continue expanding to the south and southeast, fighting the Han nobles there.

Your biggest test, however, will be Sun Ce. In my replays, he always manages to capture the most territory before his death event. There will be conflict soon enough whether it’s with him or Lady Wu who takes control of his faction. 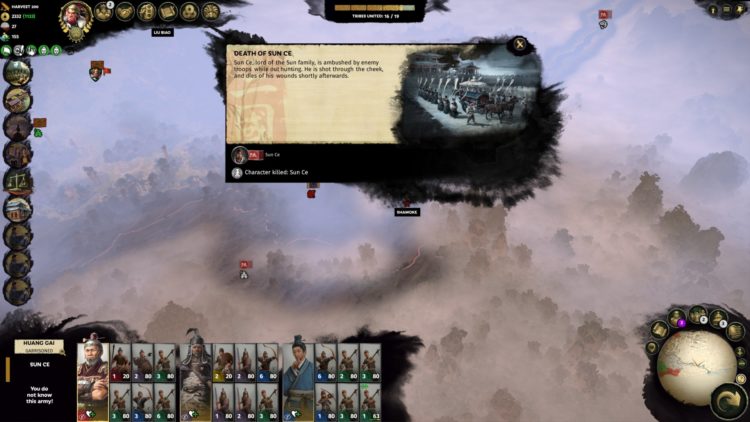 Note: If Sun Ce or any Han noble manages to capture the last settlement of a Nanman tribe/leader, you’ll need to control that settlement to obtain that tribe’s fealty and unite them to your own. The unique officers will show up in your court and you could hire them. 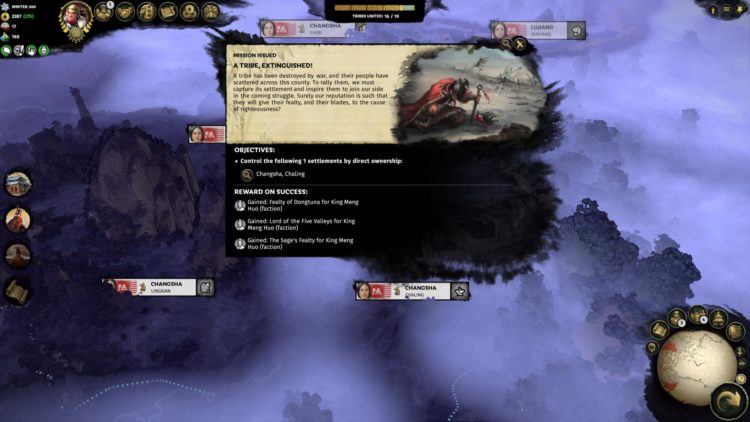 If the Han nobles end up in a coalition or military alliance with another lord (i.e., Cao Cao), then you’d see their armies marching deep into your lands. Use your elephant and tiger units to your advantage — the AI has almost no counter against them — to make battles a breeze.

In the end, you’ll simply need to control the remaining Nanman Lands and 50 settlements in total. Then, you’ll wait for 20 turns to elapse so you can achieve victory in Total War: Three Kingdoms – The Furious Wild‘s campaign. 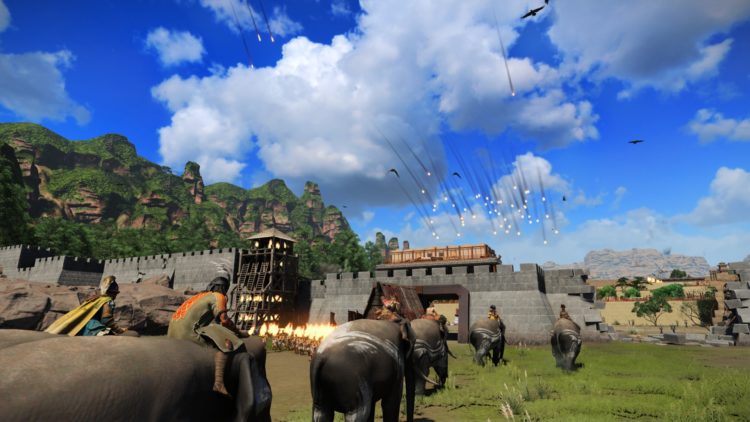 How to Train Weapon Skills, Woodcutting and Pickaxes in Valheim
20.02.2021