Things to Do Before You Unpause – Crusader Kings III: Beginner's Guide
Skip to content

Crusader Kings III, like many of Paradox Interactive’s grand strategy titles, can be very daunting for newcomers and veterans alike.

That’s why it’s ideal to take baby steps so you can figure out the things you can do before you unpause the game. It does have a nifty tutorial where you follow Petty King Murchad mac Donnchad of House Briain, the count of Munster, at the start of his journey to unify Ireland. It can be very helpful. In any case, here’s our beginner’s guide to help you out.

Crusader Kings III: Beginners guide – Things to do before you unpause

First, pick your Lifestyle focus. A ruler’s childhood education will determine which stat they’ll gain bonus XP for. You can follow this as a rule of thumb, only divesting into other choices much later in the campaign. This is also needed when you press escape and choose to switch to a new character (you’ll need to pick a Lifestyle focus for your new ruler). Additionally, a ruler can’t have a Lifestyle focus if they’re not yet six years of age. 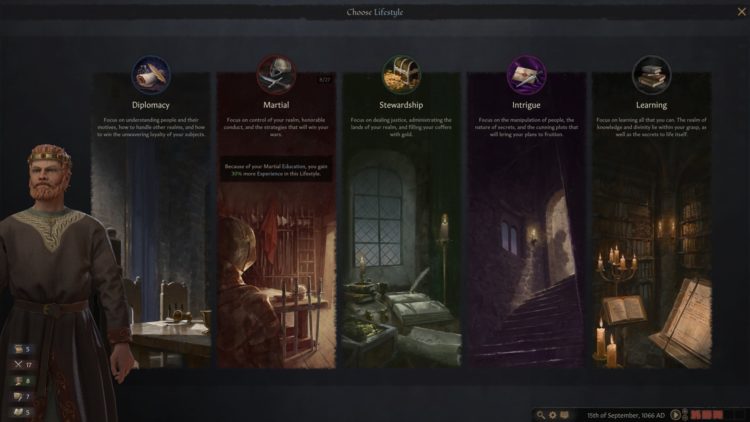 In Crusader Kings III, much like the preceding games in the series, your marriages and alliances will determine how successful you’ll be in your playthrough. Being backed by a powerful ally will definitely help turn the tide of most battles.

In the 1066 AD start, some rulers such as Murchad of Munster, the Jimenas of Castille, and Philippe of France are either unmarried or not betrothed yet (this may also apply to their heirs). This is your chance to find a spouse. The idea is to find a spouse from a powerful neighbor — one you won’t attack, but you’d like to claim its lands eventually, probably through inheritance. Try to arrange your marriage options by alliance power, but do take note of congenital traits that can be passed on to descendants (if applicable).

In Murchad’s case, I chose to get betrothed to Duke William II of Normandy’s eldest daughter, Cecilia. Meanwhile, Murchad’s heir Brian was married to the eldest daughter of the Duke of Gwynedd and Powys. These allow me to have powerful backers — the duke with control over most of Wales, and the man who would become the “Conqueror” of England. It’s unlikely that either daughter would claim dominion over these lands, but there’s a chance that their claims could pass to your heirs.

Plus, if your chosen ruler already has adult sons, you should avoid fathering more kids for at least a few more years. Crusader Kings III‘s realms will often have partition or confederate partition laws (gavelkind), splitting up your territories among all eligible children. What you don’t want to happen, early in your playthrough, is to have yet another son who’ll become a claimant to your heir’s titles. At the very least, wait a while until your heir can sire more descendants as you continue grabbing land. 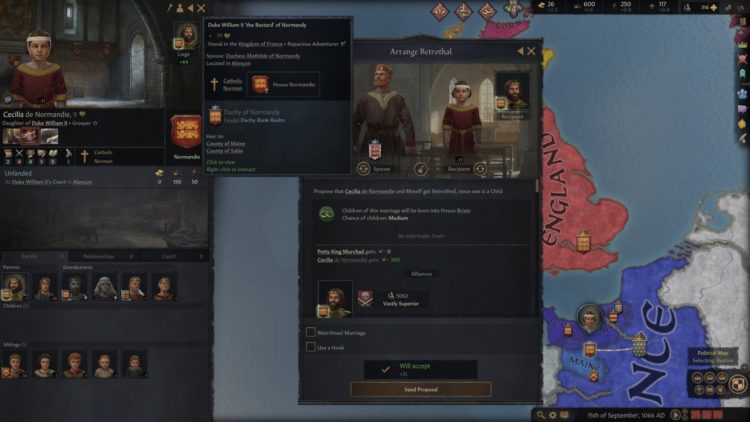 Next up is Crusader Kings III‘s council panel. You’ve got the following: 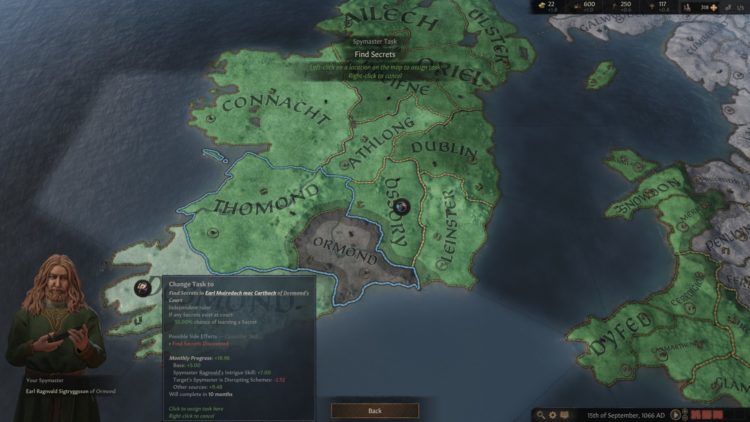 Additionally, a notification might tell you that you’re not endorsed by your archbishop or realm priest (one of your council members). You’ll need to right-click on the individual and use the “Sway” action/scheme to increase their opinion of you (or pay them a hefty sum of gold). Having a positive opinion — aka. endorsement — means you’ll have bigger levies and coffers from your church-type holdings; the higher the opinion, the higher the gains.

The last council member is your spouse who can add some extra “oomph” to a chosen stat while managing your realm. Just make sure they’re not landed, or they won’t show up in this panel.

Note: You might have a notification that says a powerful vassal wants a seat in the council. You’ll get a -40 opinion malus if you don’t give them a position. Unfortunately, due to only having four possible options, most vassals will just remain bitter. At best, you can “sway” them to your side. 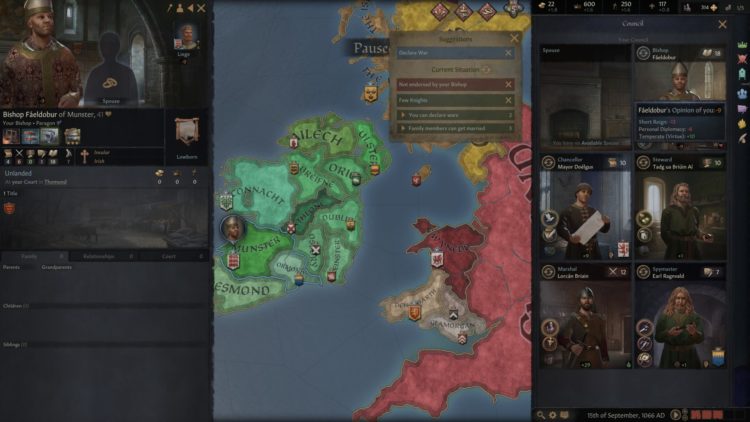 Schemes, secrets, and hooks will show up on Crusader Kings III‘s Intrigue panel. The only scheme available is “Murder.” You could go ahead and start plotting against a rival, but do take note of the chance for success and secrecy — even at 95%, you could still end up with failure. Ideally, it’s not worth murdering anyone if you’re not even getting your ruler, a relative, or a vassal next in line for the title. The events may also ask you for gold (to give your plot a higher chance of succeeding). But, if it leads nowhere, then there’s no point.

Your spymaster could try to “Find Secrets,” and these will be shown on the Intrigue panel too. You could blackmail another character in exchange for a hook — a favor that the owe you — which can later be used for a variety of actions such as revoking their titles, imprisoning them, forcing an arranged marriage, and so on. 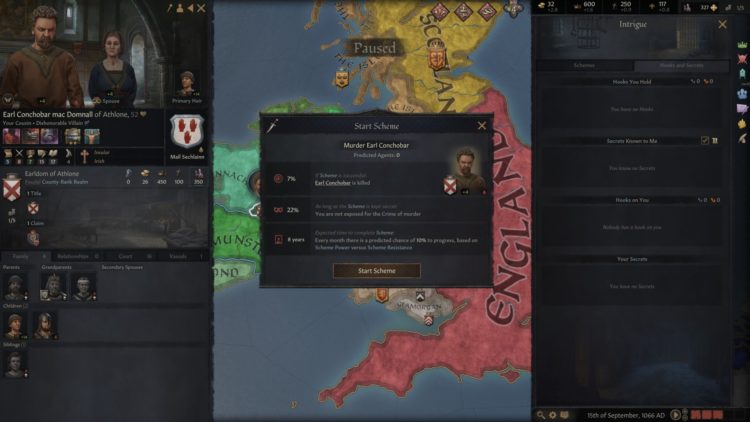 It’s unlikely that you’ll undertake decisions at the start of your Crusader Kings III campaign. However, it’s a good idea to take note of what you can eventually accomplish. Most rulers tend to have a distinct goal based on their culture group or location — such as uniting Ireland (Irish lords), conquering all of Spain and forming Portugal (the Jimenas), recreating the Roman Empire of yore (HRE), or dismantling the “German pretenders” (Byzantium).

The decisions panel also shows that you can invite knights and claimants (more on these in a while), but these are very costly when it comes to prestige. This is also where you’ll see options to relieve stress — i.e., going on a pilgrimage, holding a feast, meditating, confiding in a friend, or petting your cat or dog. The last one is an event that fires if the ruler is still a child, and they’ll have a pet companion (with some related events) as they grow older.

You’ll also see the option to invite a Court Physician which is extremely important due to moments when your character gets ill. Ideally, it should be your archbishop/realm priest which helps improve their opinion of you (just right-click on their portrait and choose “more” below “Vassalage & Court” to see the option). But, you can find other candidates if you wish. 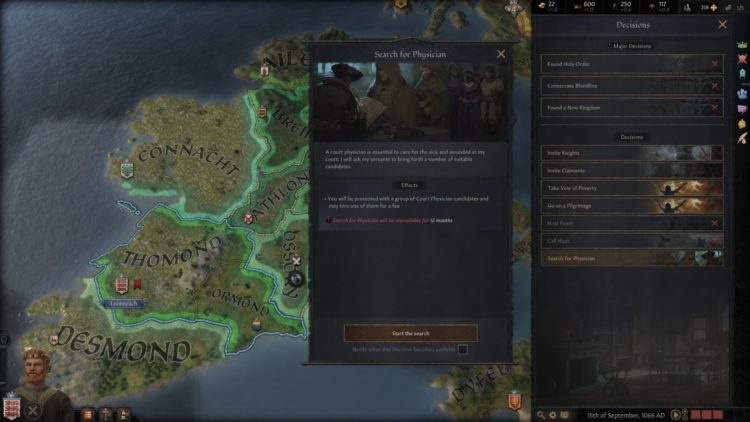 Your lands, culture, and dynasty

If you zoom in to check Crusader Kings III‘s map, you’ll notice the nameplates of little castles or baronies. These are the ones that you directly own (considered as county capitals as well). These are where the brunt of your levies and taxes will come from (alongside the ones provided by the mayors and clergy in those counties).

If you do click on various settlements, you’ll see a panel that lets you construct or upgrade buildings. These are not yet important at the start of your campaign. In fact, you won’t bother with this until you’ve amassed hundreds or thousands of gold. Ideally, though, you should focus on buildings in baronies that’ll increase the sizes of your levies such as a military camp or barracks. Alternatively, if the settlement is on flat plains, you’ll gain gold from farms; if next to the sea, you could opt for a harbor. 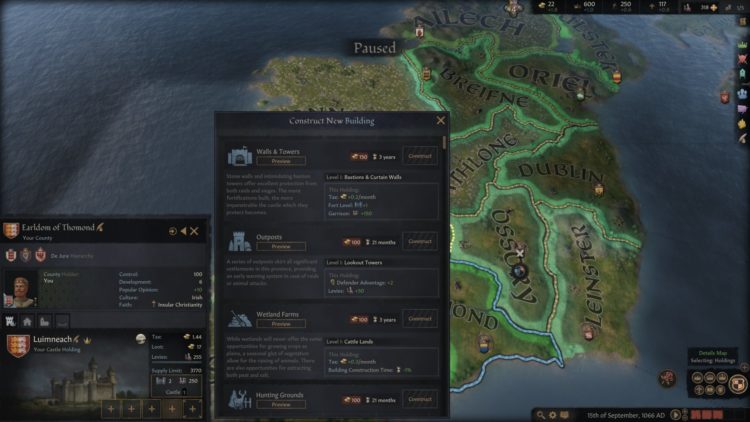 Your culture panel, meanwhile, shows your technological advancements. If you’re the cultural head, you can choose one “fascination,” something that gets researched as time goes by. Try to pick Battlements or Burghs (or their equivalents if the culture doesn’t have those yet), as well as Mangonels and Household Soldiers.

Note: As cited in our , being the head of your culture can be iffy. The main requirement is to control the most land of a given culture. However, it’s also possible for a random vassal to somehow become the cultural head even if you have the larger realm. 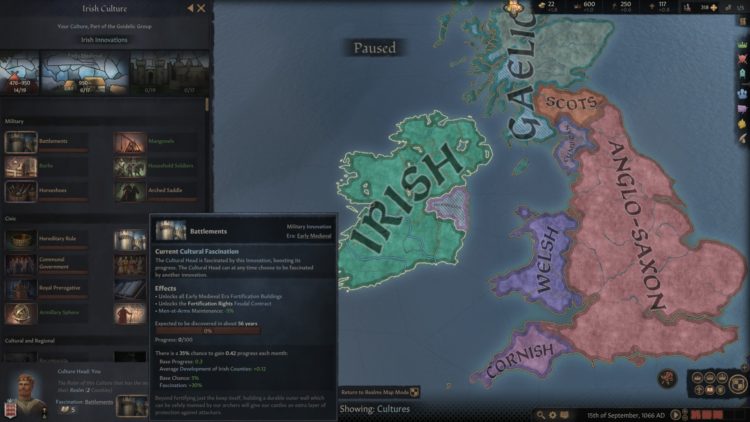 As for the dynasty panel, it shows you all living relatives that belong to a dynasty, as well as that dynasty’s houses or cadet branches. Of course, it’s ideal to grow your extended family so you can at least continue as someone else in case your ruler dies.

It’s unlikely that you’ll be able to unlock dynasty legacies already since you still need more renown — a resource that increases depending on the number of living relatives, the members of your dynasty who are spouses of rulers, and rulers who are not subservient to a liege from the same dynasty. For instance, Count Briain III and Count Briain IV won’t net you more renown if they’re under Duke Briain II. They should either be independent, or their liege must be of a different dynasty.

Note 2: Although religion has its own panel, it’s not a major fixture at least early on in your playthrough. You could review some of the tenets and laws, sure, but you won’t be able to make any sweeping changes (such as reforming it as a pagan) or creating your offshoot religion until you’ve acquired a lot of piety. 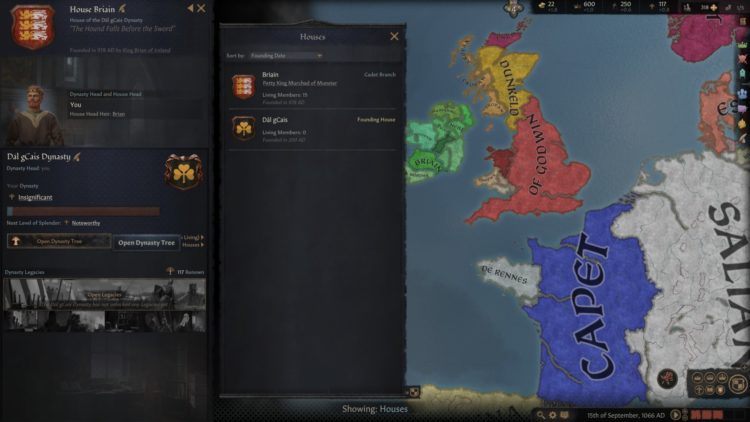 Claimants, wars, and your army

Crusader Kings III has awesome QOL improvements with regards to warfare. You’ve got your rally point (seen as a tiny flag), and you can create more of these. Rally points are where all your soldiers will be raised from (there’s a nifty button that lets you raise and disband them with ease). Similarly, you won’t need to build boats for a navy; units will just automatically sail across seas and lakes on transport ships (though you do pay a small fee).

The military panel will also show you the size of your levies (directly taken from the soldiers in your holdings and from vassals). This is also where you can recruit men-at-arms (trained soldiers with their own specializations such as bowmen, cavalry, and siege weaponry). If you have the dough, you could also hire mercenaries — their contracts last three years and can be extended; they no longer “drain” your coffers while they’re present. Lastly, you’ll find holy orders such as the Knights Templar or Hospitallers here much later in the game. 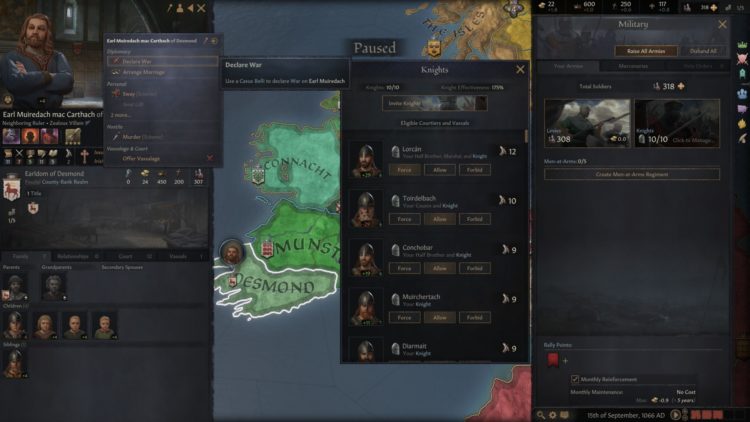 Of course, outside of the usual peasant revolt, your army will be used to press claims and declare war on others. Your ruler starts off with certain claims, but your archbishop/realm priest could fabricate a few more.

The court panel also shows characters that may have claims (and you can invite them to your court), or you could click on the “Invite Claimants” button (but only if you started out with a lot of prestige). The game’s notifications will even tell you if there are wars you can declare based on existing claims. 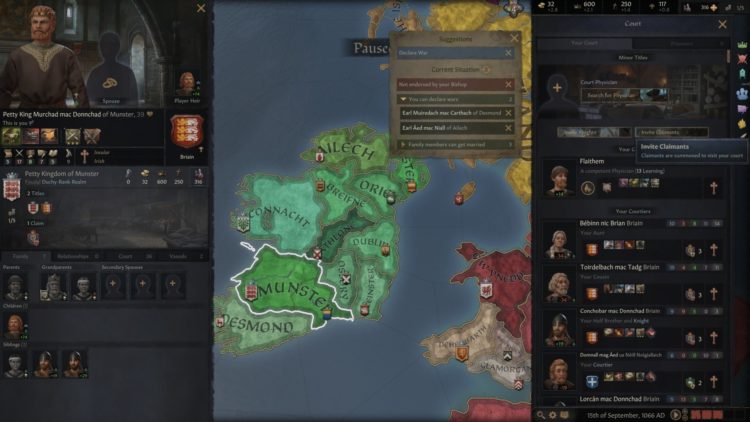 You can declare war on another ruler by right-clicking on their portrait and choosing the option. The DOW panel has a small “change objective” button in case you’re targetting other counties, duchies, or kingdoms held by the ruler. You’ll also see the relative strength comparison between you and your opponent. However, be forewarned that this can be misleading — it’s possible that your rival will suddenly have more troops at his or her disposal (maybe they recruited men-at-arms after your DOW).

Regular wars will cost you prestige; you’ll incur higher costs for larger territories you’ll claim, or if you’re breaking a truce (which you shouldn’t do since it’ll drop your Fame level). Religious wars (i.e., Holy War) will cost piety, and these may not be available depending on a ruler’s faith or their level of Devotion.

From there, you’ll commence the conflict. It’s time to raise your armies, coax your allies, and conquer new lands in Crusader Kings III. Now, you can finally unpause the game. 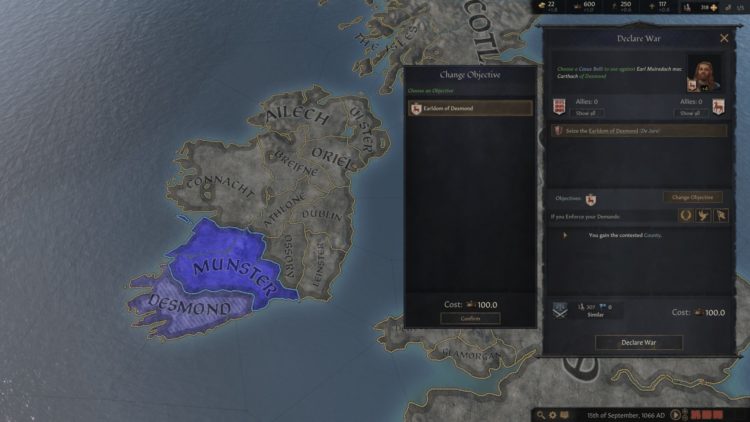 Wolverine Fortnite: How To Get The Logan Skin Style

Amnesia: Rebirth How to Enable Debugging Window and Console

All Achievements in Amnesia: Rebirth Guide