Galactus is finally here, heralding the explosive end of Fortnite’s current season. Here’s everything we know about the Season 4 finale, the v15.00 update, including start time and early Fortnite Season 5 patch notes.

Fortnite Chapter 2’s fourth season is on the verge of ending with another huge, potentially map-destroying event as Marvel supervillain Galactus finally arrives.

Galactus, known to his enemies as the “Devourer of Worlds,” is rumored to be the key to another huge ‘black hole’ style event in Fortnite. It certainly makes sense too; when he lands in the Marvel comics, he feasts on whole planets for fun.

Here’s everything we know about Season 5 and the v15.00 update so far.

When does the Galactus event begin?

The countdown to the Season 4 finale, and the beginning of Fortnite Season 5, has officially begun. The battle royale now displays a ticking counter on the lobby holo-table.

The lobby countdown gives us a perfect idea of when to expect the Nexus War event to begin too; the timer is ticking down to 4pm EST / 1pm PST / 9pm GMT on Tuesday, Dec. 1, and 8am AEDT on Wednesday, Dec. 2 for Australia.

The event was originally meant to be held on November 30, but was delayed by two days just ahead of the Season 4 finale so Epic could “get everything perfect.”

Galactus is here, right at the end of Fortnite Season 4.

Galactus event: what to expect

It’s now been all-but-confirmed that Fortnite players will join the fight against Galactus. They won’t be doing it on foot, however ⁠— instead, they’ll be attacking in the Battle Bus!

Epic Games has been dropping hints about the high-flying escapades on Twitter over the past few days, including an image of the iconic bus loaded with Gamma Cells. “Think we’ve got enough?” the Fortnite account asked on Nov. 24.

Five days later, on Nov. 29, the Fortnite devs confirmed early leaks; players will indeed take control of the Battle Bus. They wrote, “You do know how to drive the Battle Bus, right?” and “Join the Fight” alongside three images of the bus.

The fight against Galactus will see many of the Season 4 heroes and villains, including Thor, Iron Man, She-Hulk, Venom, and plenty more on the frontlines against the looming threat.

Whatever is set to happen, it’s going to be big. The Chapter 1 finale, the infamous “Black Hole” event, took a 480mb update to load in. The Nexus War battle, which should begin on December 2, is a whopping 4GB in size. There’s a lot on the way!

When the event begins, players will be able to load into a “THE DEVOURER OF WORLDS” playlist. Once loaded in, Fortnite fans will be tasked with “defending the Island to save all of Reality” against the newly-arrived Galactus.

The battle with Galactus, and flying the Battle Buses, have been confirmed.

What is not so certain, however, is what happens at the end. Many Fortnite dataminers have refused to reveal details, but some event leaks have still slipped through the cracks.

According to a leak on Reddit, which was posted on Twitter by @Asriel_Dev, the event’s conclusion will see words, reading “To Be Continued… in Season Five!”, spread across the screen. A new countdown timer will also appear at the bottom.

In a Black Hole-esque waiting game, Fortnite players may be locked out of the game. The counter reads “13:13:26:32” in the leak ⁠— suggesting a 14 day wait ⁠— but this seems like it could be a placeholder rather than an exact time.

The Fortnite status account tweeted that Fortnite is currently in a prep state for Chapter 2 Season 5 (v15.00). The server downtime for the update begins December 2nd at 12 AM ET (5 AM UTC) and is expected to run until 4 AM ET (9 AM UTC).

During the current prep state, you won’t be able to play Fortnite before the scheduled server downtime maintenance. Here’s the official tweet from the Fortnite status account: 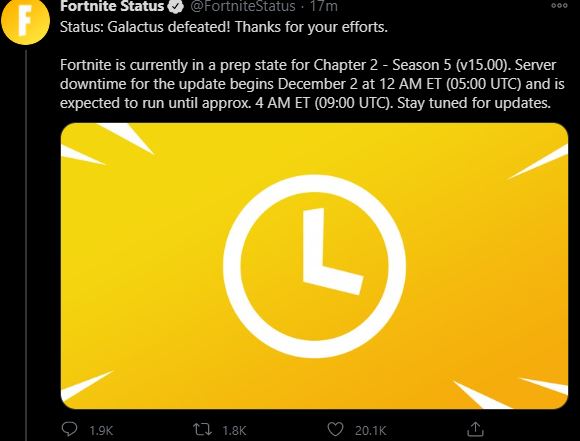 We’ll keep you updated as to when the Fortnite servers are back up after maintenance, so be sure to check back.

After the Galactus event, Season 5 begins! That means update v15.00 will be deployed onto Fortnite servers, and after some downtime, players will be invited back in-game.

When the game returns, there’s every chance the whole Fortnite world has changed with it ⁠— according to Season 5 leaks, the next theme will be “Star Wars.” There’s also been a number of leaks suggesting big map changes too.

Following the success of Season 4’s Nexus War, which introduced skins and weapons based on some of Marvel’s most beloved superheroes and villains including Storm and Venom, Fortnite seems to be once again teaming up with another Disney-owned franchise, Star Wars.

Recent posts from a number of leakers including ShiinaBR and others have suggested a crossover with The Mandalorian is imminent, with bounty hunter Din Djarin and the adorable viral sensation Baby Yoda both being a part of the major Season 5 update.

There’s even been a leaked advertisement for the Battle Pass, which shows off the new Mandalorian skin accompanied by a little Baby Yoda, which should be another Back Bling cosmetic like Rocket Racoon, from Guardians of the Galaxy.

With Galactus “destroying reality,” or at least doing some serious damage, it’s likely the Chapter 2 map will be warped or deleted entirely.

According to theories heading into Season 5, the Fortnite map won’t exactly be new, but it won’t simply be a return to ‘Athena’. Instead, players will be able to contest the popular battle royale on a blended map that combines both versions.

Season change or not, Epic Games always makes sure to weed out any bugs plaguing Fortnite in every patch. This week’s update has already had a handful of fixes confirmed on their official Trello board too.

So, there you have it! That’s our early patch notes with all the changes & fixes planned for Fortnite’s Season 5 update patch. Once the official v15.00 details are released and added to the game, we’ll be the first to let you know.

How to Build and Upgrade the Forge in Valheim

Shattered – Tale of the Forgotten King Save File Location Guide

Crusader Kings 2: Complete Console Commands List 2021. How to Use and Open

All Endings in Tribal Hunter Guide

From small tweaks to features that don’t work yet, this is what Android 12 is bringing to the table so...

Outlander Who Caught the Wind is the first chapter in the Prologue of the Genshin Impact Archon Quests. Here is a walkthrough of all the stages of this task. Quests Bird's Eye View Unexpected Power Forest Rendezvous Wind-riding Knight Going...

Players will have to solve puzzles involving statues in order to complete quest The Chi of Guyun The Chi of...

Looking for the best build on Ayaku in Genshin Impact? Ayaka wields a sword and is a five-star character based...