For ISEKAI QUEST players, this is a guide to getting every achievement in the game, based off my own experience. Let’s check it out.

This guide will be broken up into multiple sections, as you might have noticed: general tips for gameplay, a section for each love interest, story, and then miscellaneous achievements. I will update this guide to the best of my ability whenever new content is added to the game, and/or whenever I discover new information that might be helpful to others.

I decided to make this guide because I didn’t notice any others (at least in English). I know that the achievements have descriptions but sometimes opening a guide is comforting. That and seeing negative reviews on the game makes me sad when it’s because people think the game is too hard. I have 100% achievements in Mirror and HuniePop and intend to keep the trend with this game as achievements are added. Why? Because I have a deep-seated issue with turning everything into a competition and Bejeweled doesn’t have anime waifus. But whatever, I hope my insight helps you to some extent while you build your harem.

These are just tips for playing the game in general. I’m not gonna go over every feature of the game since this guide is just to help with achievements but I can in the future if it is requested.

Tip #1: Never settle for a match of 3, unless you are trying to accomplish something specific (like delaying the battle for a miscellaneous achievement) or there are truly no other matches for you to make. I didn’t beat games like this by making every match I saw. I beat them by thinking before I made moves. You need to pay attention to the board state but this will come with practice.

Tip #2: Get the Stun skill and upgrade it as quickly as possible. It is one of the most useful things in the game. It will save your life in many battles because abilities are annoying to deal with.

Tip #3: All of your stats are important and it’s going to depend on your playstyle which one you lean on. This does not mean you should only upgrade the stat you care about the most. You should upgrade all of them. That being said, having a high Attack is always good because the more damage you do with every match, the faster you will win a battle. I’m not saying to only upgrade your Attack. HP is important as well because the battles are going to increase in overall difficulty every time you win one so all incoming attacks/abilities will hurt you more.

Tip #4: If I had to rate the love interests in terms of difficulty (from most to least difficult)…

It’s hard for me to choose between saying whether Shymi or Eris is the most difficult, but like everything else in this guide, this is my opinion. Both of them have annoying, painful abilities. I have more negative experiences with Eris. Maybe that is because Shymi is newer and I understood the game much better once she was added to the game, but both can be difficult battles.

Tip #5: Don’t tilt. At the end of the day, this is just a game and games are supposed to be fun. The thing about games, especially puzzle games, is that you can get better at them by just playing and practicing. In addition to that, this is a roguelite: you lose your story progress when you die but you keep your stats. You don’t lose when you die, you lose when you stop trying.

These are all of the achievements that are simply tied to gameplay and not to a specific love interest or the plot.

PERFECT || Win a battle with the full HP.

This will come with practice and much more Health than you start the game with.

This is chance and will unlock eventually if you keep winning battles or just buying Tomes of Power. You get it whenever the three cards are white, blue, and purple.

WOMBO COMBO || Make 15 combos or more in a battle.

I believe you get this achievement whenever you make a match and the game proceeds to keep the matches going until the count reaches 15.

I honestly had to work for this one and didn’t get it until I started a 2nd save when Shymi was added to the game. This was easier for me to get after gaining some HP and Attack because it was easier for me to control the encounter. I just kept making inefficient matches until my HP got low, healed if it got too low, and then end the fight as quickly as possible once I got below 100 HP but with a buffer (if you stop too close to 100 you might heal by accident and ruin everything).

NOTHING TO DO! || Get insta-killed by no more moves state.

Agnes will be your best friend for this achievement. Just keep making inefficient matches until her ability fills the board to the point where you don’t have any moves left. Much like the previous achievement, this was actually easier for me to get later in the game because, again, higher stats made it easier for me to control the encounter.

Super Mana Stones are the colorless gemstones that are created when you match 5 stones. Just make and break 10 of these in one encounter and you’ll get the achievement. I don’t really have advice on getting this one other than to keep your eyes peeled for opportunities to create them.

These are the achievements that are tied to Maphy, our favorite Succubus.

Maphy is the easiest love interest to battle in my opinion and it’s because her ability is easily manageable compared to others. You should still clear the affected stones when she pops the ability but it’s not as dire as Eris’s bombs.

Interview with the Succubus || Make Maphy bites you.

This depends upon what you say to Maphy the first time you meet her. Choose the first option; if you do this, you will begin the battle with 50% HP. 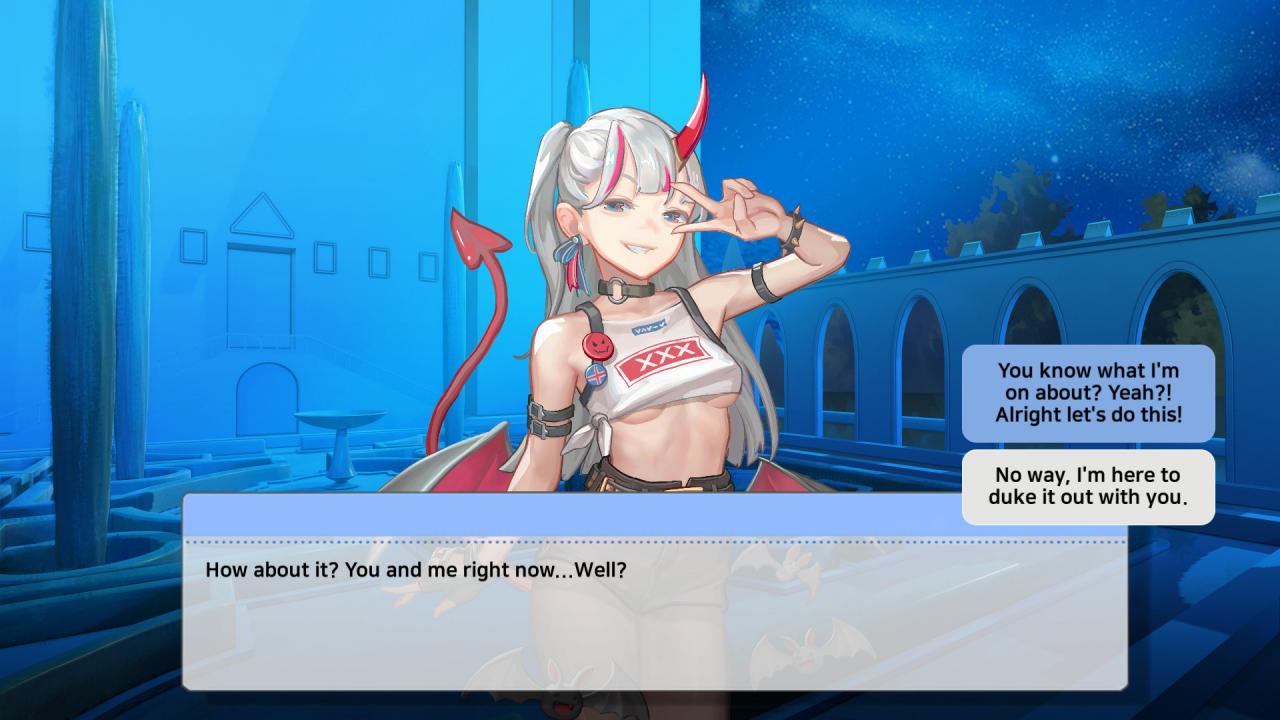 You get this whenever you beat Maphy in 3 battles and all 3 hearts are full.

These are the achievements tied to Yuria, our knight in shining armor.

Much like our favorite Succubus, Yuria’s ability is easy to manage as well. It is like a much less aggressive version of Agnes’s ability. Just clear it as it happens and you’ll be fine.

This depends upon what you say to Yuria the first time you meet her. Choose the second option; if you do this, you will begin the battle with 50% HP. 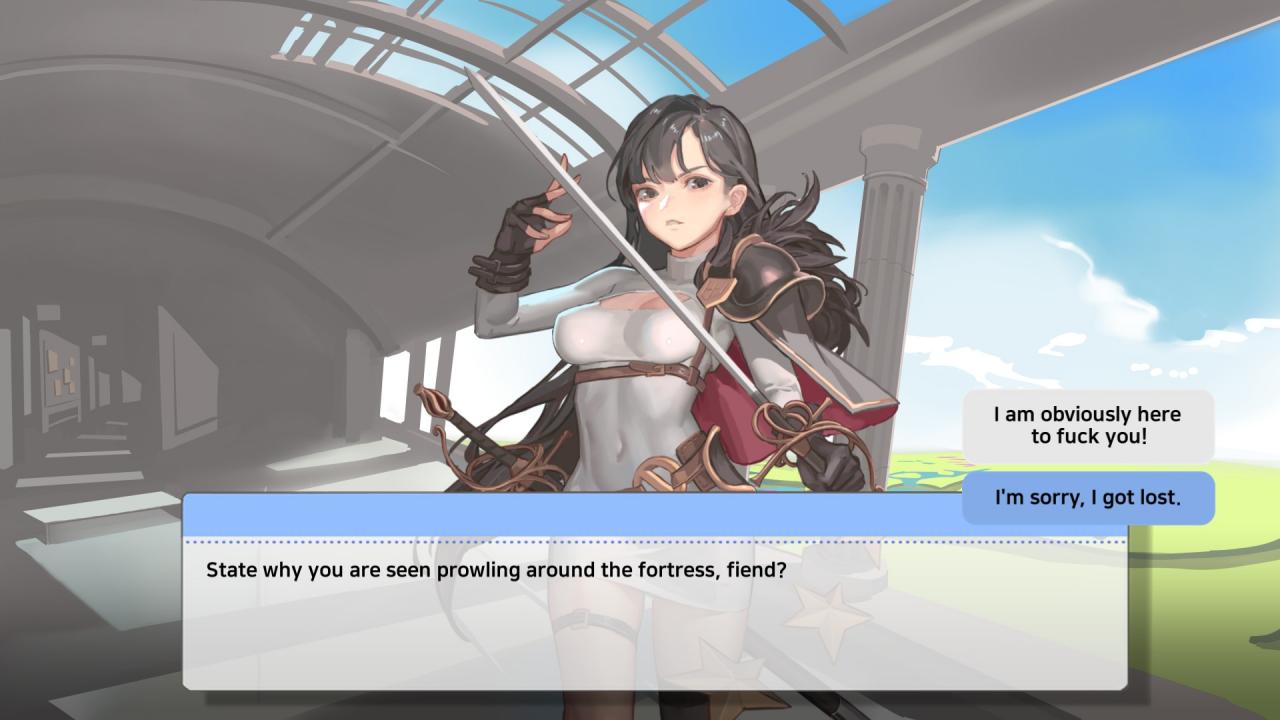 You get this whenever you beat Yuria in 3 battles and all 3 hearts are full.

These are the achievements tied to Agnes, our big titty goth mage.

Just make sure her ability doesn’t overrun the board and you should be fine. This is important because, unlike the other love interests’ abilities, the stones affected by Agnes’s ability will spread to adjacent stones. Because of this, she is the best person to battle if you are trying to get the NOTHING TO DO! achievement.

Sleepless in Isekai || Choose to stay a night in the 3rd battle with Agnes.

This is self-explanatory. Instead of fighting her on the 3rd encounter, take up her offer on resting for the night instead. 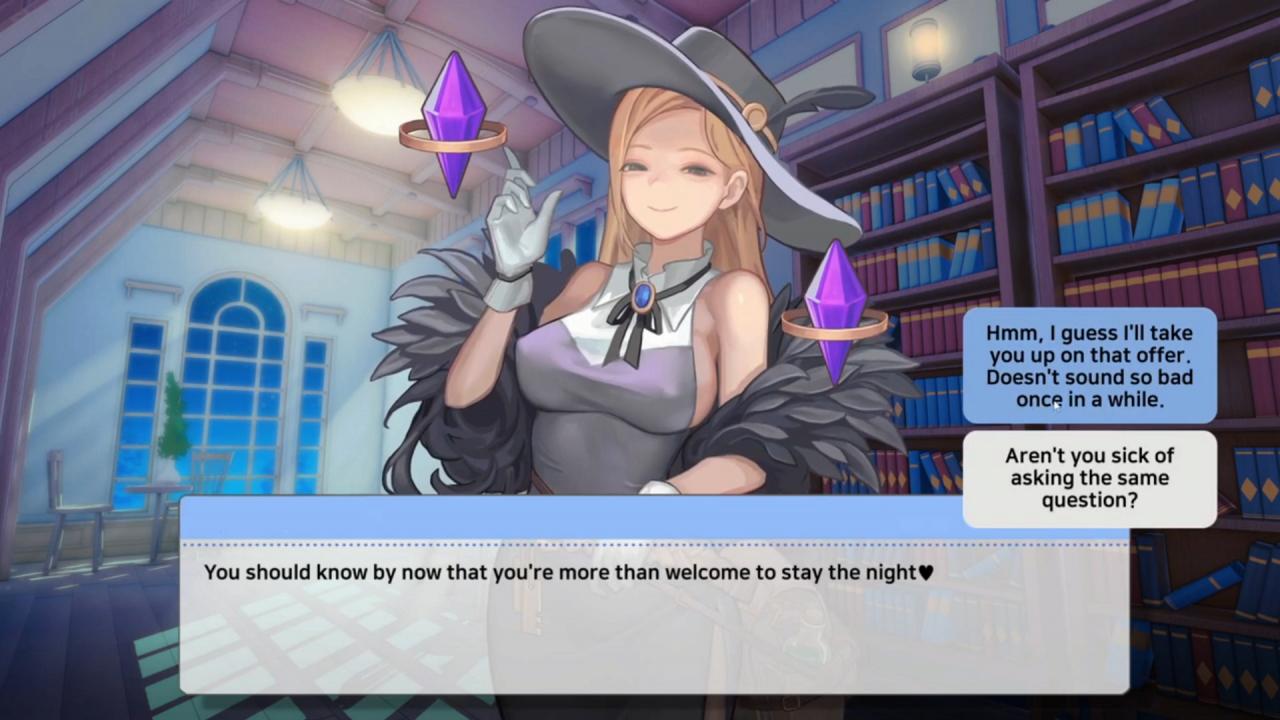 You get this whenever you beat Yuria in 3 battles and all 3 hearts are full. This was honestly one of my favorite “dates” in the game. It was just nice, I guess.

These are the achievements tied to Eris, our… er… favorite elf >.>

This is honestly the most annoying love interest to fight and yes, I’m including Shymi in that statement. You will want to take care of Eris’s bombs as quickly as possible. They can be overwhelming and cost you the battle if there are a couple that all explode on the same turn or consecutive turns.

A Girl and A Gun || Make Eris Shoots you.

This depends upon what you say to Eris the first time you meet her. Choose the second option; if you do this, you will begin the battle with 50% HP. 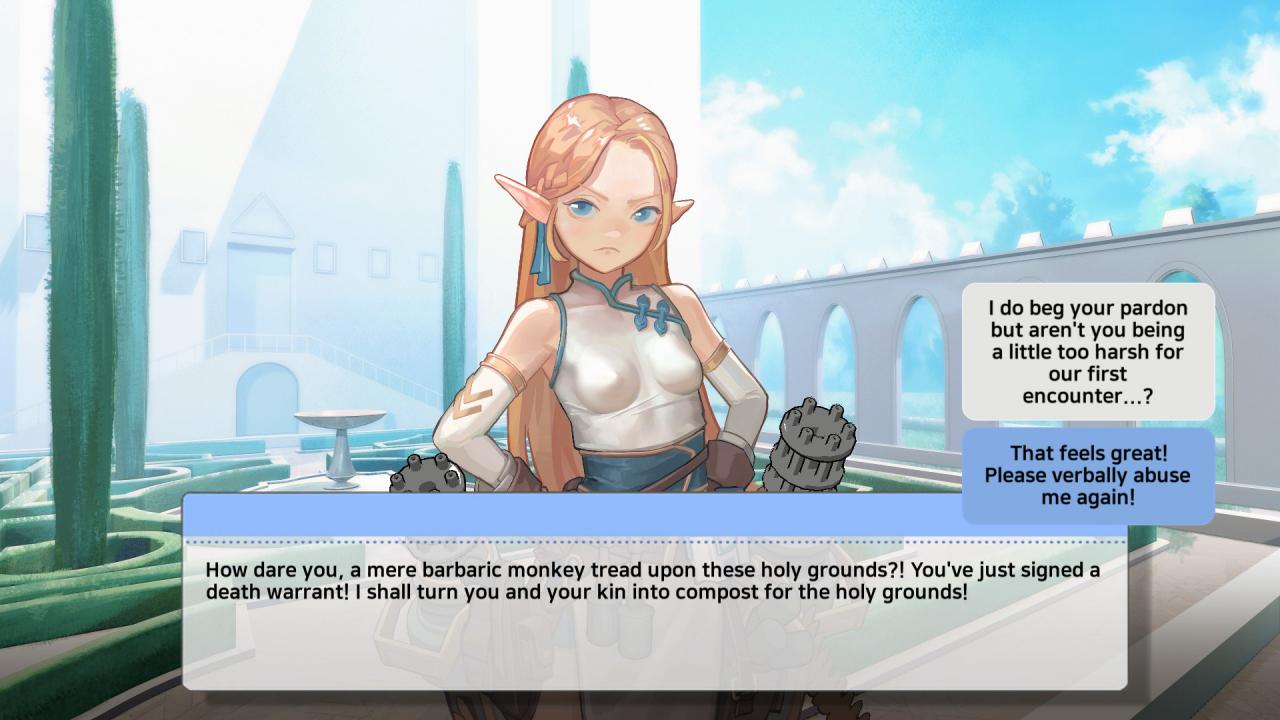 You get this whenever you beat Eris in 3 battles and all 3 hearts are full.

These are the achievements tied to Shymi, master of the blade and also our wallets.

While you were chasing the other waifus, I was studying the blade…

In order to beat Shymi, you really just have to beat her at her own game: battling her works best if you have a high Attack.

Teasing Master! || Get mugged by Shymi.

This depends upon what you say to Shymi the first time you meet her. Choose the first option; if you do this, she does actually take 50 gold from you. 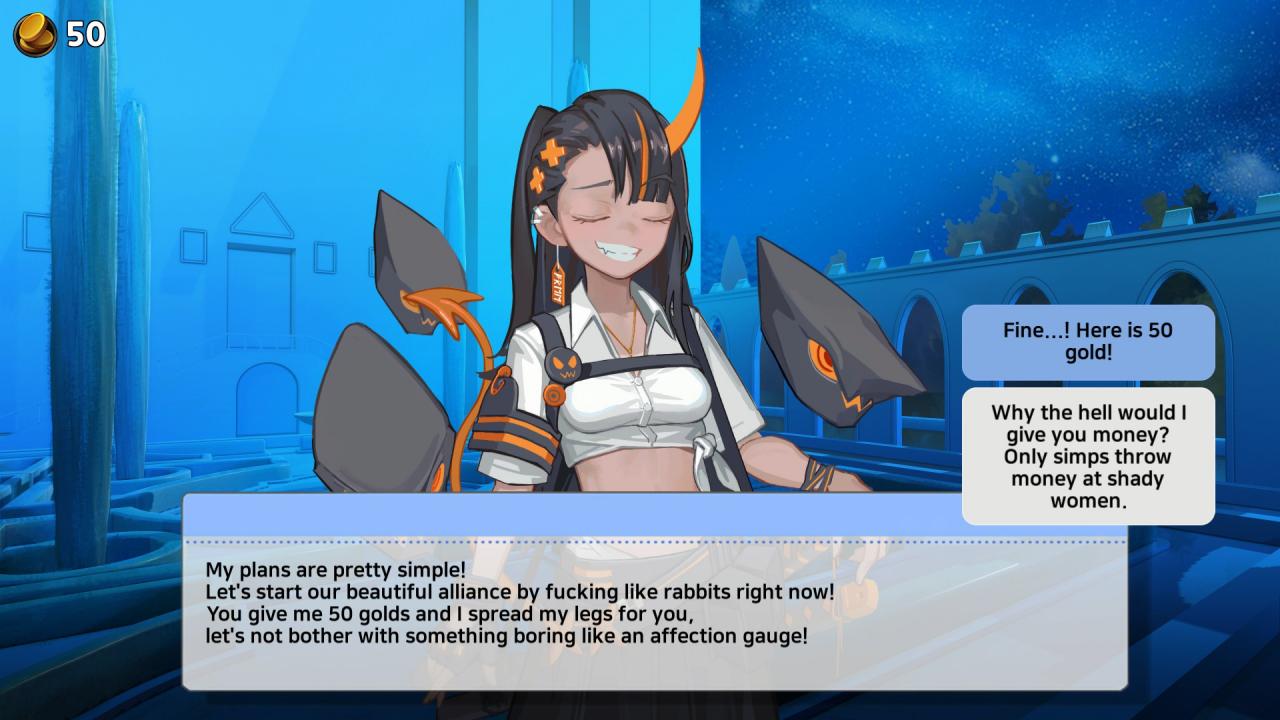 No kidding at all? || Get mugged by Shymi three in a row.

Just choose to give her money before all 3 battles.

You get this whenever you beat Shymi in 3 battles and all 3 hearts are full.

These are achievements that are tied to the game’s story, because yes, there is a story going on here.

RED OR BLUE?
You cannot miss this achievement but your choice does actually matter:

Déjà Vu
Trust me, you’re gonna get this one real quick. You will be “revived” after you die for the first time and then you’ll get this achievement.

These two achievements are tied to the ending of the game and you must choose one. After filling the love meter of every love interest, you will be given a choice.

IGNORANCE IS BLISS
You get this by simply choosing to leave the Isekai Quest world.

WELCOME TO THE REAL WORLD
You must defeat The Developer. This battle took me a few tries. I will consider adding a guide to this specific encounter in the future but I am not interested in doing so at this moment.

That’s all we are sharing today in ISEKAI QUEST 100% Achievements Guide, if there are anything you want to add please feel free to leave a comment below