Loop Hero players, let’s analyse the efficiency of Farms and Lumberjacks, whether you should build them, and how quickly they pay for themselves.

I wanted to compare Farms and Lumberjacks so I could be informed on how good a deal they are. I wanted to know a few things:

Farms are an OK investment, and pay for themselves in about 30 expeditions, it’s more efficient to use 7 tile farms than 8.

If you’re interested in how I got to those numbers, read on.

I decided to tally up the resources it cost to build them, and see how quickly they paid for themselves.

Each resource in the game is hard to value, they each are used for many things and you need a lot of everything. It’s a bit tricky to tell exactly what each resource is worth, I personally think food is a little more valuable than wood because it’s more annoying to farm on an expedition, but they’re both pretty similar. Luckily the game gives each item a value, Hydrogen.

Each resource can be created from hydrogen, and destroyed to produce hydrogen. For the purposes of this guide I’ll price everything based on the hydrogen is produces when destroyed, for simplicity. This is basically from the perspective of a player simply converting all the resources produced by the building straight into hydrogen.

I will however also calculate how long it takes for your investment to give you the resources as though you destroyed all the items needed to make the building, and converted them into whatever the building produces. We’ll call that point the “Better than alchemy” point.

Lets start by comparing out buildings: 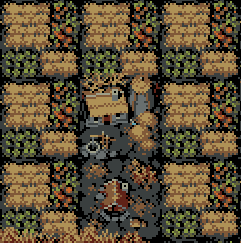 You must place farms adjacent to another building. This means you will get 7 tiles of productivity. If you want 8, you can place a mud hut before placing the farm, then delete the mudhut to give the farm the full 8 tiles. This costs an additional:

Half is refunded when you demolish the hut, so it costs an additional 200H for a full efficiency farm, 2 of which is food (this will be important later)

The farm generates 7-8 Rations per trip, 8 rations is 2/3 of a Food Supply 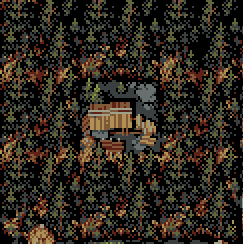 Lumberjacks require Forest to provide value, the cost of a forest is:

3 of this is wood, which will come up later. A basic lumberjack + forest costs 1525H and a fully efficient one costs 4325H. It generates up to 8 sticks per expedition, which is 2/3 of a wood plank.

So with all that in mind, let’s try and compare the efficiency of each of these.

Both sticks and rations are worth 3 hydrogen each. Unfortunately, they also automatically convert into wood planks and food supplies when they hit 12. It’s possible to be slightly more efficient by always destroying your sticks and rations, but ultimately this is annoying micromanagement that gives you only a small advantage. So I will be disregarding it for calculations, and simply rounding them up into their full forms which are sadly worth less.

Wood planks and food supplies are both worth 25H each, so my calculations will use that. This means that these results are a kind of worst case scenario, so it’s possible to do slightly better by decomposing your rations and sticks, but ultimately I think it’s probably better to let them turn into full objects and use them to build or upgrade something.

If your farm is placed normally, it will have 7 gardens and will produce 7 rations per expedition, which is 7/12 of a food supply.

So a farm will pay for it’s hydrogen value in:

If you converted the cost of a farm into food directly, you would get 8 food (96 rations) for a regular farm, or 13 food (156 rations) for an 8 tile farm. So the farm beats alchemy at:

This means farms are a decent investment for hydrogen, but they do take a long time to pay for themselves. If you desperately need food it’s probably better to alchemise your food. 7 tiles seems to be much better than the full 8 tiles, but 8 tiles will eventually catch up. Any number of fields below 7 is guaranteed to pay for itself slower and should be avoided.

Lumberjacks are much more expensive than farms, for the same yield. So it should be obvious that farms are much better, but lets see how much better. If you only build a lumberjack to unlock deck cards, it will have 1 forest. But if you try for a max efficiency lumberjack, you will want to aim for 8. They will create 1 or 8 sticks respectively, and 12 sticks are required for a plank.

Lumberjacks will pay for their hydrogen value in:

It seems pretty clear that investing in lumberjacks is not only bad for farming hydrogen, compared to a farm. But also honestly much worse than simple alchemy. The only real caveat is that a lumberjack will pay for itself much faster if you surround it in forest. This means that the compulsory lumberjack you produce to finish your deck might as well be fully surrounded, since you’ll probably end up playing 200+ expeditions. But I think it’s also fine to just view the lumberjack as a sunk cost, and move on.

Even if you specifically need a particular resource, generally speaking it’s gonna be better to alchemise it than to invest in these two structures. You’ll get the resource now instead of later, and it’s generally more efficient.

However, since you’ll end up with a bunch of spare money later and there’s loads of space in town, I personally like to throw down a few farms to generate a bit more passive food, particularly since farming it out on an expedition is a bit irritating and a lot of upgrades are quite food hungry.

Additionally, filling out your lumberjack is good because it’ll pay for itself faster, but it’s still gonna be really slow, so I wouldn’t stress.

Finally, the village is honestly kinda a sandbox environment. It’s a place for you to express yourself and make it look pretty, if you so desire. So if the town design you want features a lot of lumberjacks, or 8 tile farms, don’t let me stop you. A nice looking town is it’s own reward, efficiency be damned.

That’s all we are sharing today inLoop Hero Farms and Lumberjacks Guide, if you have anything to add, please feel free to leave a comment below.
Post Views: 144
Tagsgames Guide Loop Hero

Loop Hero How to Unlock Every Encyclopedia Entry

ALTF4 How to Actually Find the Golden Chicken