For Prime & Load: 1776 players, this guide is designed to give you an insight into how the Bose IR works; what commands it uses and how to execute them. In addition, here and there are a few tips on how to best behave in Prime & Load 1776 during a linebattle so that you don’t stand out as a complete beginner. The guide is intended to help recruits of the 8th Infantry Regiment as well as players who belong to or want to join regiments of the Hessian Brigade in the historical LB.

Welcome dear recruits! This guide should give you an insight into how a Hessian regiment works in battle. Therefore read carefully and remember what is said here! Because the quick and correct execution of the commands listed here can save your life and that of your comrades. 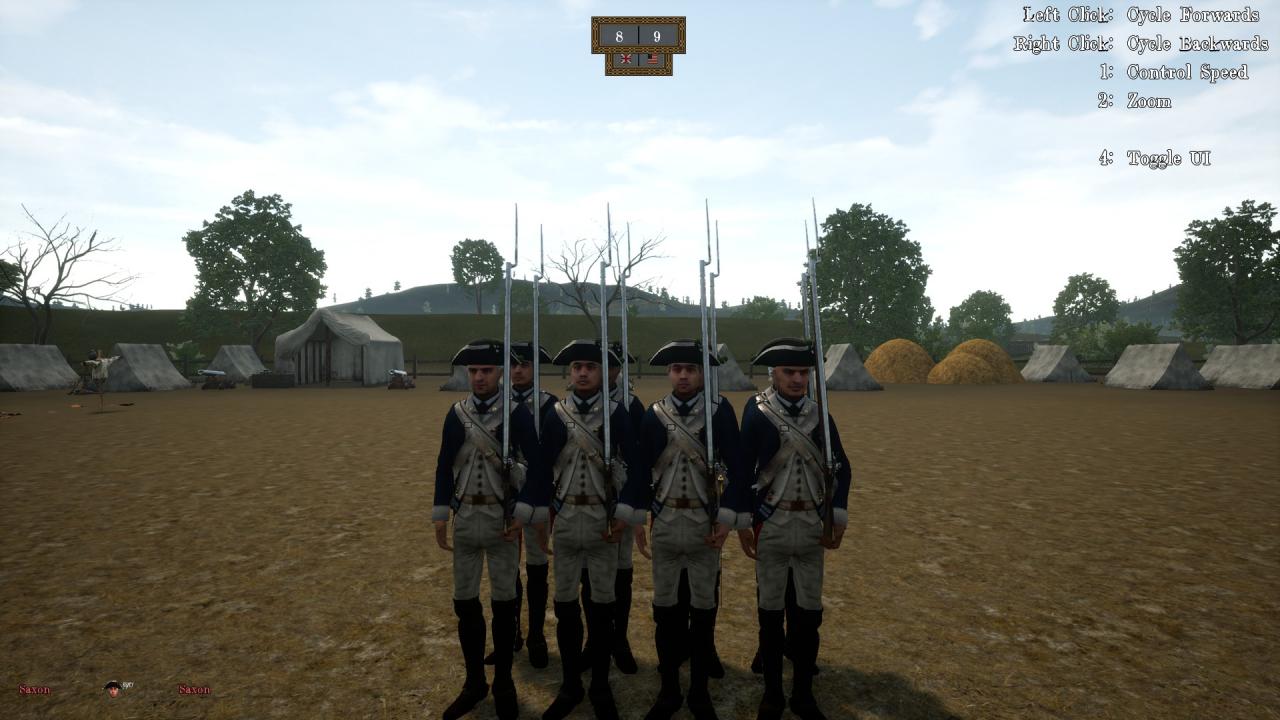 The regiment fights in line and weekly training sessions are held so that all members can follow the orders without having to think about what exactly each order means. The faster the orders are executed, the better you can work as a line and fire more volleys. 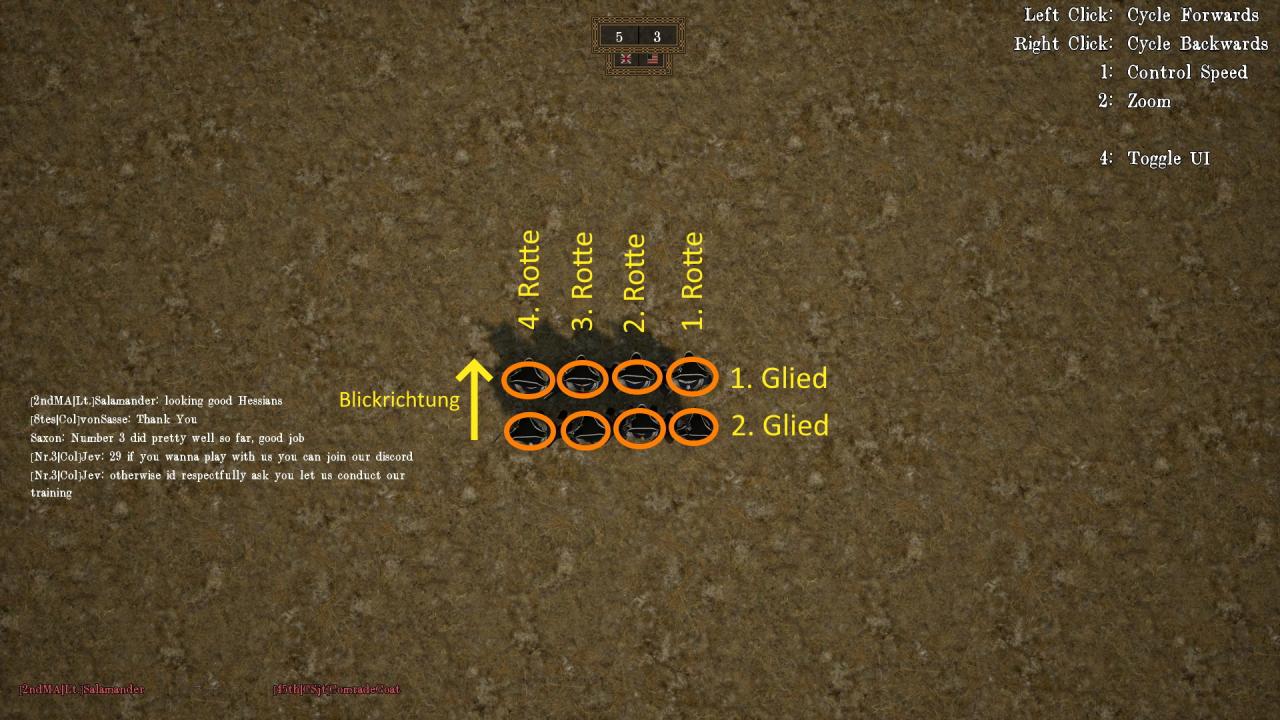 The side by side standing hot member; the behind each other standing rotting. 1. member 1. gang lines up in front of the officer. This soldier and the one who completes the formation on the left are called winged men. This position should always be occupied by non-commissioned officers or high-ranking crew members.

Right/left turns – you!
The whole line/lines turn 180 degrees over the left/right shoulder. (Important: The line that is now in front and was previously the 2nd link is now the 1st link, because they are in front. Accordingly, the previous 1st limb now becomes the 2nd limb).

Right/left over!
The soldier turns 90 degrees to the right/left.

March in ordinal step!
The soldier “walks” normally. In 1776 the walking mode can be changed with “Shift”.

March!
The soldier moves straight ahead.

Section halt!
The whole line stops. In doing so, the rightmost man is directed.

Advance to my position!
The line advances to the height of the commanding officer.

In rows set right/left around sergeant: Right/left around!
Opposite to “Right/left march up! The soldiers march or stand in a line formation. In the silent state all soldiers except the right/left outsider (wingman) turn in the corresponding direction. When a “march” is given, the non-turned soldier starts walking and the rest follows as a line. This also works while running. But here there is no additional “march” command and the line is formed like this. 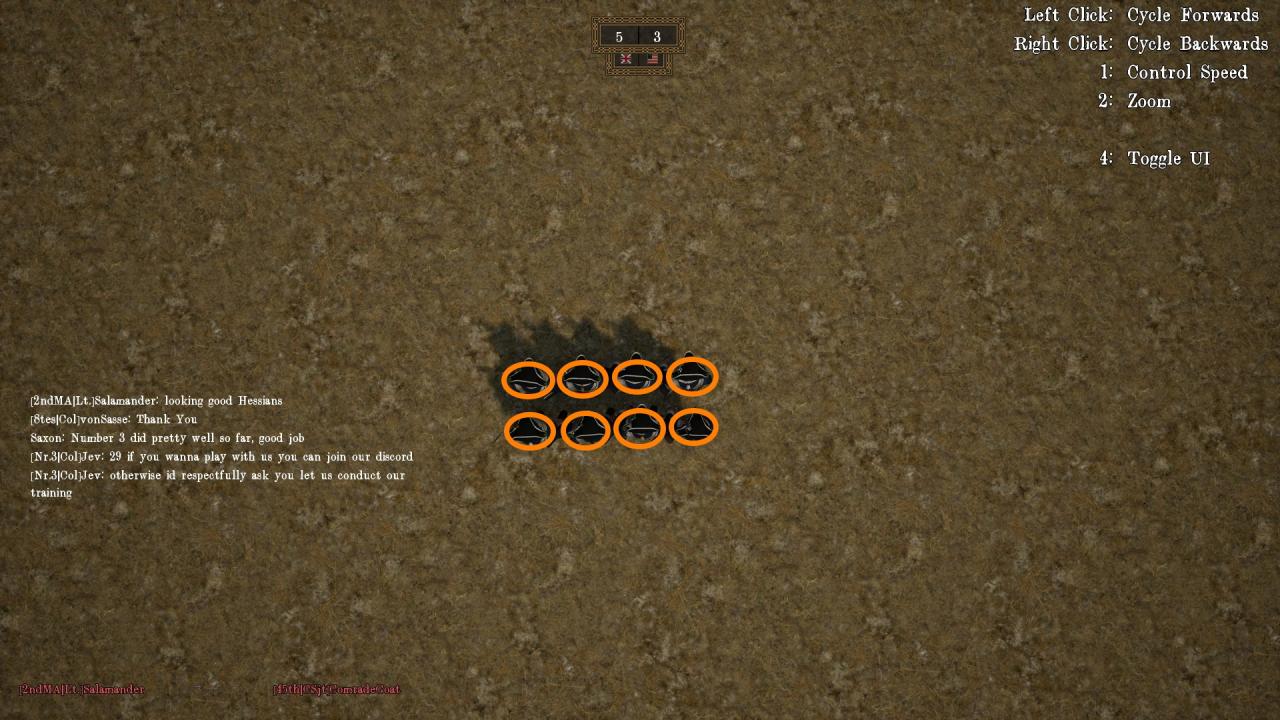 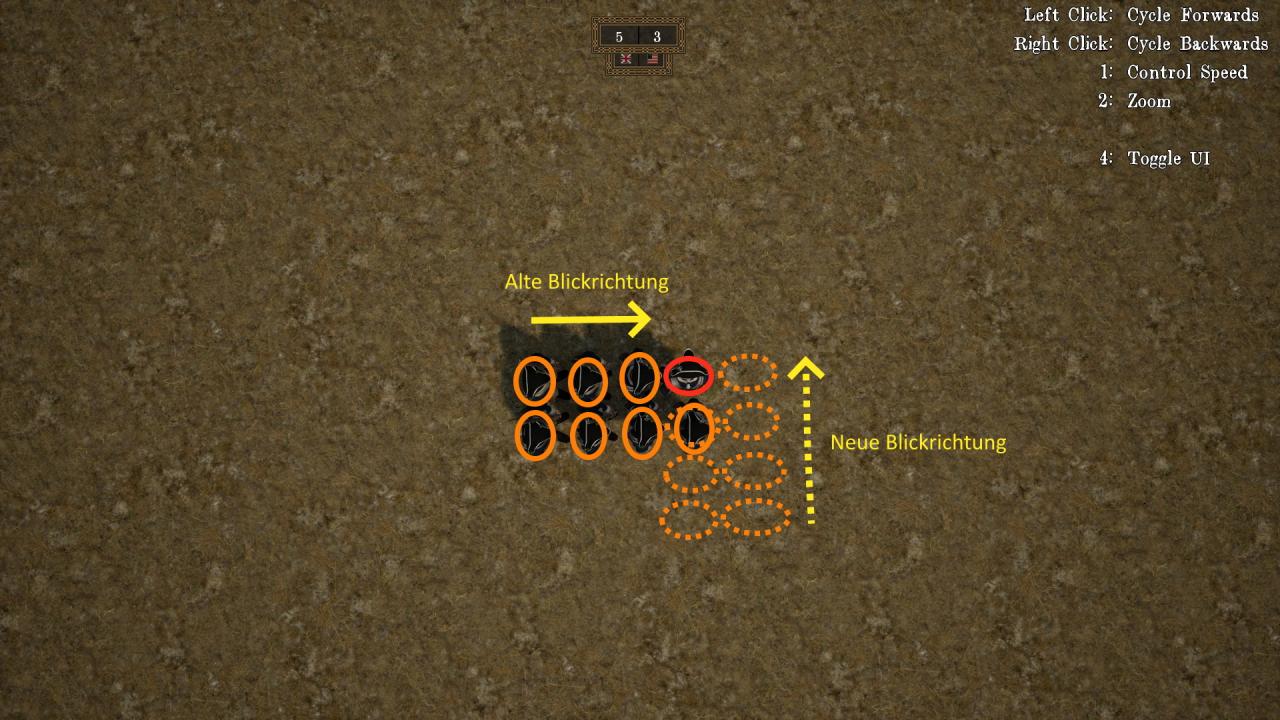 Because the left wingman marches off, the remaining soldiers can join without any problems. It is important for the former 2nd limb to catch up with the wingman in order to create two orderly rows.

Right/left marches up! Sergeant: Right/Left turn!
While marching, an arc is made to the right/left until the soldiers form a line at the height of the corresponding wingman while running. It is not stopped. Of course, this command can also be executed from a standing position, as can be seen in the picture. In this case, the senior officer gives the command “March! Only then the soldiers move to their new positions. The point of reference and orientation is like the soldier at the side to which they are marching. 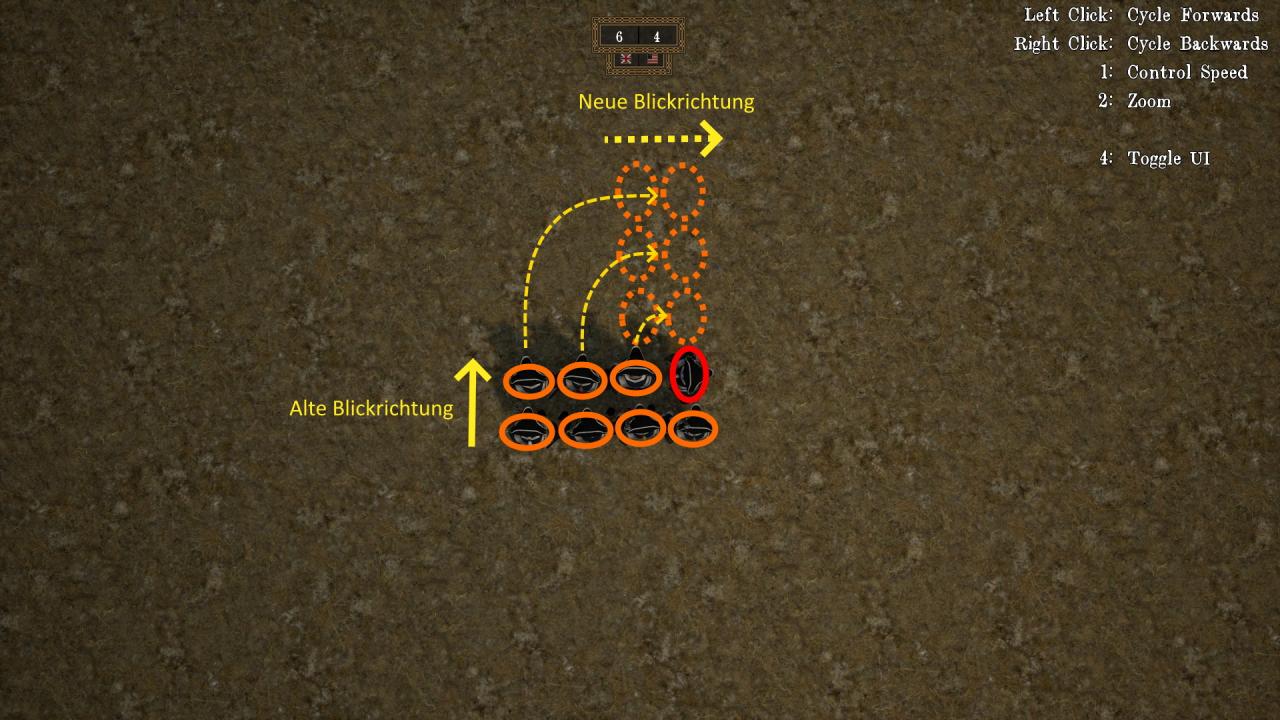 The soldiers swing like a door around the wingman, who works like a hinge. For the soldiers in the second limb, the easiest thing to do is to follow the man in front of them. 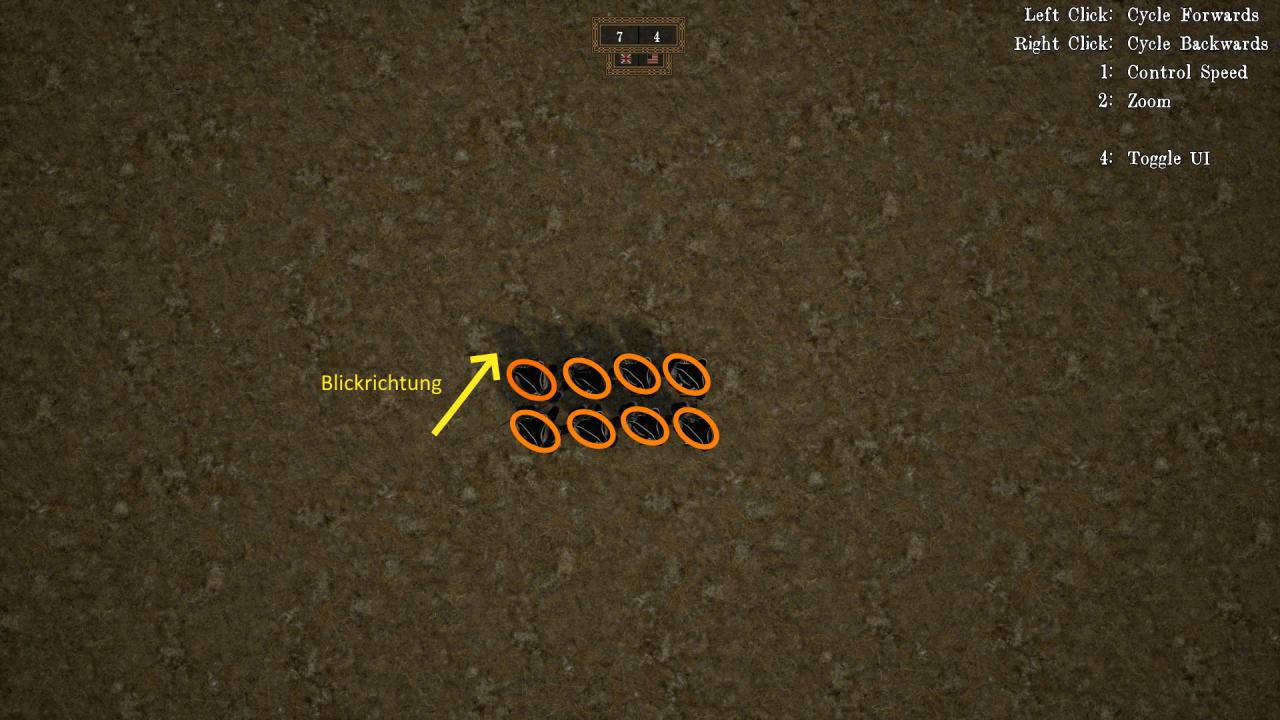 As shown in the picture, the soldier simply turns diagonally in the indicated direction and marches until the command “Straight! This command is mostly used to simply walk around objects while marching.

Straight!
The soldier turns 45 degrees back to his previous position. Since the line is often slightly damaged at half right/left, the soldier then straightens automatically.

Hold direction!
The leading officer moves away from the Abteilung but the right wingman still runs in the previous direction until a new order comes.

Retreat!
The soldier makes a 180 degree turn and runs away. Reloading is aborted by switching to close combat mode.

Gather!
After a retreat command, the soldiers form a line in front of their officer, facing the enemy. As soon as the soldiers are standing, the system switches to close combat mode if it is not already on. No independent reloading, wait for the order to do so.

Strike!
Attaching the rifles
Set it down!
Put down the rifles

Fire!
Since 1776 has a target system, the soldier waits here until the target circle has closed the furthest and then fires. However, one should not wait too long, reloading is not welcome.

Fire on my command!
In contrast to “Fire!”, the soldier shoots immediately, no matter if the target circle is closed or open.

Battalion fire! /Free fire!
The soldier may choose his target and choose when to fire.

Loaded!
The soldiers who currently have no shot in the barrel load their rifles.

Stopper!
Firing is stopped, all those who are reloading are still loading. If the soldier has just fired, he may not reload. He can then do so on the command “Loaded!”. command.

Charged!
All soldiers in the second limb take a step to the right so that they can see and shoot through the shoulders of the soldiers in front of them. 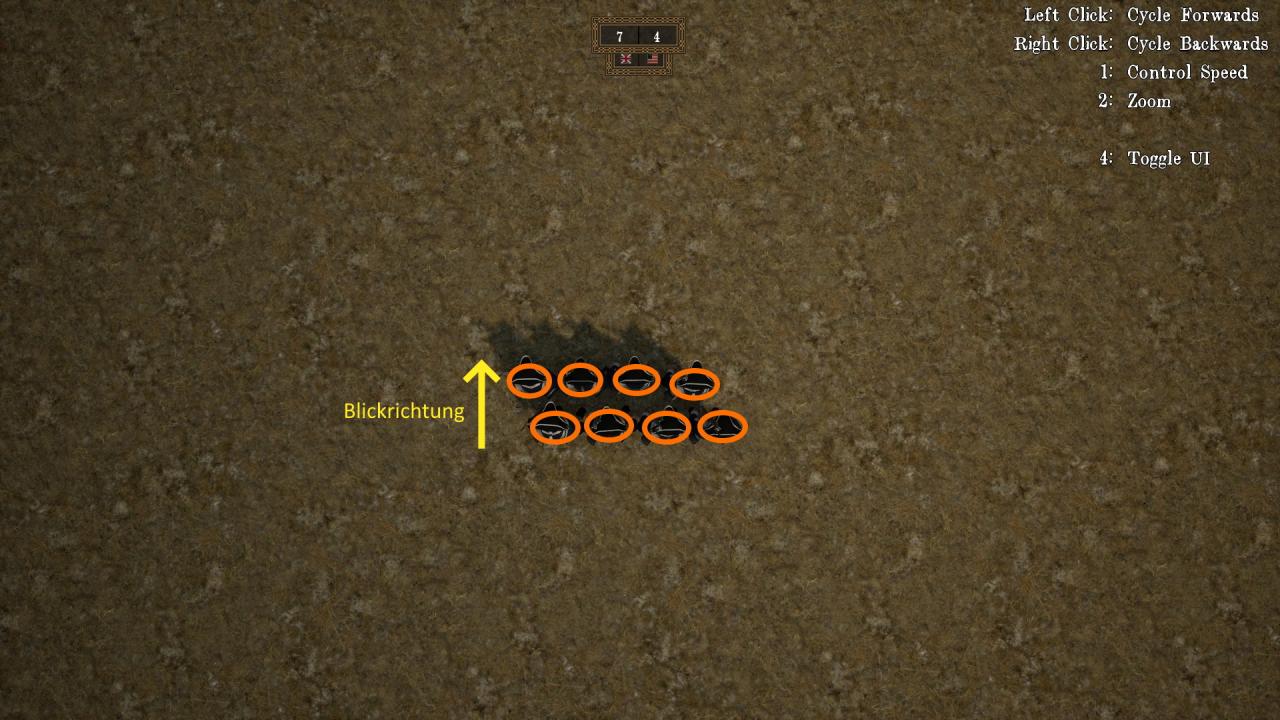 When charging, the soldiers are set to “gap”. That means they look between the shoulders of the soldiers in the 1st limb. In this way, it is possible to shoot in two limbs without having the difference in height of the limbs at “1st limb off”.

Since the soldiers’ hit boxes are not yet perfect in Prime & Load, you have to create slightly larger gaps when charging in the game so that you don’t shoot the soldier in front. This looks something like this: 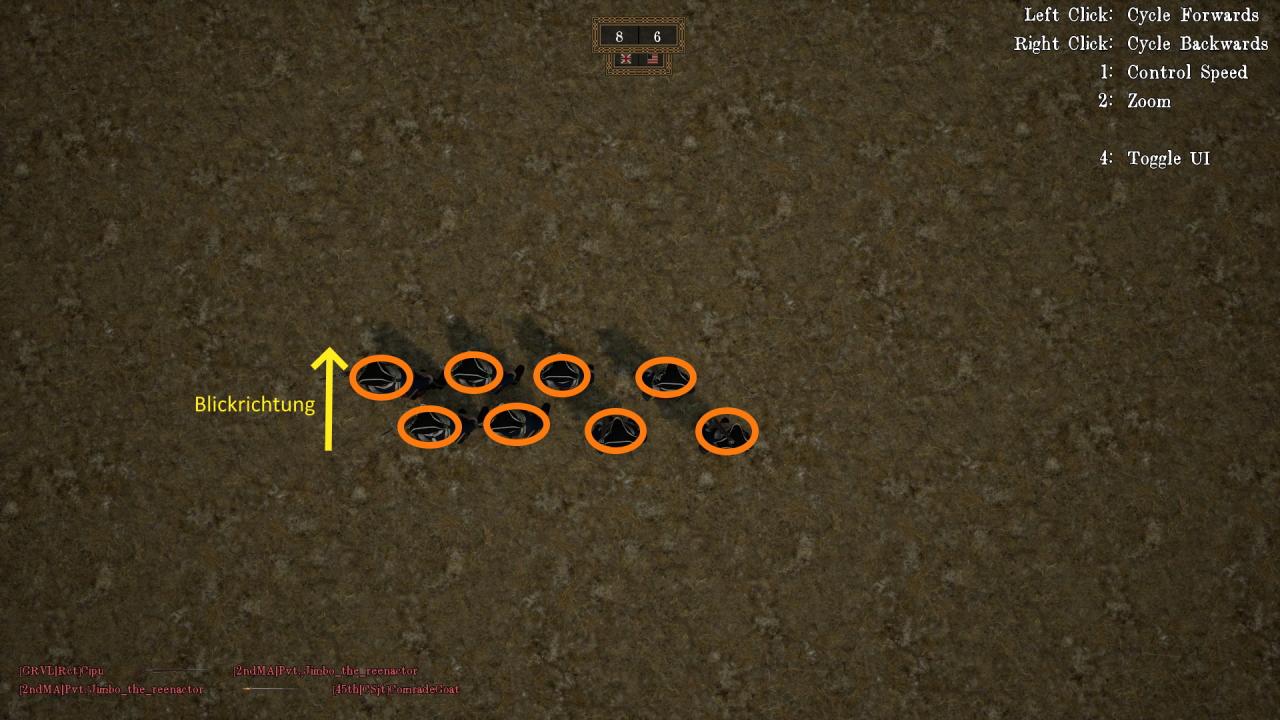 Since the hit boxes still need some work, the soldiers in Prime & Load 1776 have to make larger gaps. Otherwise, the man in the back will not shoot the enemy, but the man in front of him dead.

Close up!
Cancel “Chargirt!”: The second limb takes another step to the left, so that they stand behind the one in front of them.

To the attack!
The soldier can break off his previously launched attack and goes into close combat. Here everything is allowed until a new order is given.

The upper bayonet stitch has a smaller range but is faster. In contrast, the lower stitch has more reach, but takes longer to be executed.
With F the soldier can give his enemy a blow with the rifle butt.

In 1776: P&L you can get an attacking rider off his horse by squatting down in melee mode. The soldier points his bayonet forward and kills the horse immediately. To do this, however, the horse has to rush towards the soldier and not past him! The rider is thrown out of the saddle and has to get up first. During this time he can be killed with two quick bayonet stabs.
Behavior of the Hessian soldier in combat
Linebattl rules
Linebattle (LB) is the name given to events in which several regiments fight against each other. There can be LBs with many or few rules and each one has its own rules, but there are a few that almost all have the same rules:

Read the rules of the organizers carefully and ask officers in case of ambiguity. If you violate the rules, your regiment may be excluded from the linebattle, so make sure you follow them.

Service in the infantry regiment of Bose

The regiment in action
You want to see the above commands in action and under enemy fire? Then take a look at the recording of the first line-battle of the Prime & Load Historical Event! Here, the Bose Regiment, along with the Body Regiment, is engaged against the American and French troops.

That’s all we are sharing today in Prime & Load: 1776 Infantry Regiment of Bose Guide, if there are anything you want to add please feel free to leave a comment below.

We Happy Few All Console Commmands

How to get the Snow-Tombed Starsilver. Dragonspine Stone Tablet Locations in Genshin Impact

In the Mountains Genshin Impact – World Quest Walkthrough and Rewards

Chasing You – Season 2 EP 9 Would You Prefer Poison Or A Bullet?: Walkthrough